“Money, Wealth, and Prosperity” are terms which came up again and again when Global Bridges members inquired about the current situation and future of Vietnam during their first Study Trip to the country in early October. These are the values ​​that the extraordinarily young Vietnamese population name above all others when surveyed. 70% of the Vietnamese population is under 30, and only 4% are currently considered “old”. How is this compatible with Confucius and communism? Our German expat guide had an answer ready for us: It is a perfect match! Confucius caused turbo-capitalism, since wealth is a form of patriotism. A certain pragmatic attitude was clearly recognizable here.

What else unites the people of Vietnam? Certainly “Boogeyman China”. Vietnam does everything to avoid becoming dependent on China, like other neighboring states. “Without China, but with Germany” is an opinion often heard in Vietnam. The country is very German-friendly, in large part due to connections to the former GDR. And the chances of getting “money, wealth and prosperity” are looking good! Vietnam is experiencing strong economic growth; in fact, it’s one of the fastest-growing countries in Asia. Economic growth of 6.8% in 2017 exceeded even the expectations of the Vietnamese government. The decisive driving forces behind this boom are a rapidly increasing export surplus, a steady high flow of foreign investment, as well as “healthy consumer spending”, a theme which was emphasized during our appointments in Ho Chi Minh City’s “German House” with the German Chambers of Commerce Abroad (AHK) and members of the Vietnamese Politburo. The trade war between China and the USA does the rest. Perhaps this may soon be called “Good-bye China, Good Morning Vietnam”?!

From October 7 to the 14, Global Bridges members travelled to Vietnam for the first time. What lasting memories, and above all else, what new insights did we take away from our travels? For what does Vietnam stand? In summary, VIETNAM stands for the following:

Vietnam is young, very young! 70 % of the population is under 30, and more than anything else, they want prosperity. To them, capitalism, Confucianism, and communism are not mutually exclusive, but complement one another. Ambition among young Vietnamese people was on full display during Global Bridges’ visit to the Hanoi Law University, an institution with 17,000 students. Here, students can learn German law with a German-language faculty, thanks to partnerships between Vietnamese and German law universities. Equally impressive was certainly our visit to the Vietnamese-German University, funded in part by the Federal Ministry of Education and Research (BAAF) and the German Academic Exchange Service (DAAD). 98% of every graduating class finds employment within a year.

Vietnam cultivates diverse international relations, before all others with Germany. The two countries have close ties reaching back to old bonds with the former German Democratic Republic. The German language continues to appeal to Vietnamese students at the Goethe-Institut, despite fierce competition with English. The work of the Goethe-Institut is not always easy, due to number of required permits from the censorship authority.

The “German House” in Saigon is certainly exceptional. It was founded on a joint German-Vietnamese government agreement and houses the city’s German Consulate General as well as representatives from German business and financial institutions. Our discussions with start-ups, such as the education consultancy “EDUBAO”, were particularly fascinating.

Vietnam is currently in a phase of political change. The consolidation of the position of president and party leader that occurred after the death of the President Tran Dai Quang was criticized – and not only in Germany. With this development, the already immense influence of the Communist Party has expanded further. Additionally, the new Cyber ​​Security Law offers the party greater influence over freedom of expression on the Internet; Vietnam ranks 175th in the current World Press Freedom Index. Again and again the corruption problem was mentioned. In this case, Vietnam ranks 107th on Transparency International’s International Corruption Index. There are certainly efforts by the party to take action against corruption. The dilemma is that by doing so, one is sawing off the branch on which one sits. Often, the impression is that allegations of corruption are only levied against party members if they have fallen out of favor for other reasons.

Global Bridges visited Vietnam during a particularly tense period in German-Vietnamese relations. Due to the kidnapping of a Vietnamese businessman in Berlin’s Tiergarten by the Vietnamese secret service, the German Federal Government suspended the strategic Partnership 2017 initiative, although it was later reinstated. The German Foreign Office negotiated for the Human Rights Award winner of the German Judges Association and his assistant to travel to Germany. However, there can be no question of “business as usual”; the challenge now is simply the normalization of bilateral relations. The future will show which type of politician will prevail in Vietnam: 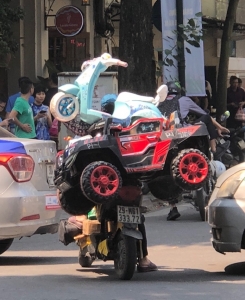 If you want to be mobile in Vietnam, you need to drive a scooter or moped, ideally with half the family on board, as well as the dog, and with a chicken cage mounted on the luggage rack. Also – very important – do not forget the mask! The mask may not be needed quite as often in the near future, since electric scooters are on the rise. And with automotive startup manufacturer Vinfast and a car “made in Vietnam” with German technology, the development of a fleet of electric cars and busses is in the works. Alternatively, you can ride a bike – but only from Strongman, of course. Their impressive factory produces high-quality bicycles, with or without electric motors, for brands abroad. Our visit to this factory showed once again that Vietnam can manufacture goods en-masse on a level rivalling China, without compromising quality. 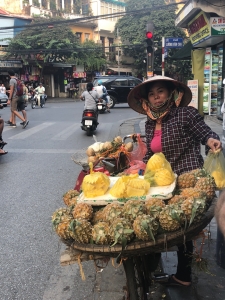 Vietnam is one the world’s fastest growing national economies and is one of the most dynamic in Asia. The country’s economy grew by an impressive 6.8% in 2017. This is due to rising exports, a steady influx of foreign investment, and a growing middle class with rising consumer demand. This was emphasized during talks with business and AHK representatives in the “German House” such as a representative of the Vietnam Leather, Footwear and Handbag Association (LEFASO) and members of the Politburo. A dynamic environment within the ASEAN trade union also contributes to economic growth. In addition, unlike other communist states, Vietnam has taken the path towards global integration. Vietnam is a World Trade Organization (WTO) member and one of the few countries in the Association of Southeast Asian Nations (ASEAN) that participates in all relevant free trade developments in the region.

Furthermore, Vietnam profits from a young and motivated workforce. Vietnam is therefore called the “Prussia of Asia”. The Vietnamese government is quite eager to create favorable conditions for foreign investment. 40% of GDP now goes to foreign direct investment. 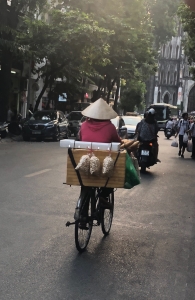 Opportunities present themselves through the trade war between China and the USA. China currently exports goods via Vietnam. The majority of the country’s industrial capacity is in the south. The north of the country, on the other hand, is perceived as a “peasant state”.

The discussion with Mr Bruno Angelet, EU Ambassador to Vietnam, was also very insightful, especially with regard to the EU Free Trade Agreement with Vietnam. The agreement is expected to come into force in early 2019, with the hope that other Asian states will follow suit. Of particular note within the agreement is a sustainability clause, in which the signing parties must comply with international labor standards.

There are roughly 300 surnames used in Vietnam, with ‘Nguyen’ the most common. So it is no coincidence that the delegation met a few officials with this name. A particularly memorable highlight was our conversation with Prof. Dr. Nguyen Thien Nhan, Party Secretary of Ho Chi Minh City and member of the Politburo. During his time as Minister of Education, Prof. Dr. Nguyen was responsible for the establishment of the Vietnamese-German University before continuing his political career as Deputy Prime Minister. He is also very German-friendly and holds a PhD from the University of Magdeburg. Of particular note was his willingness to speak with us about his experiences working at the Vietnamese Embassy in the GDR during the fall of the Wall.

Definitely worth mentioning is the meeting with Mr. Truong Tan Sang, the former President of Vietnam. Above all, he emphasized the importance of investing, and when touching on other subjects, was consciously diplomatic. 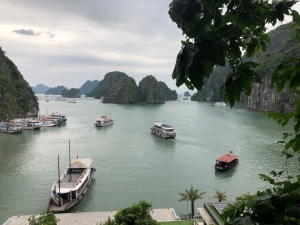 Global Bridges Study Trips are lovely, and quite exhausting! Luckily, a few good souls organized a trip to Halong Bay for the weekend. The pictures speak for themselves.

Vietnam stands for much more than what this report reflects. And as is always the case after such a successful trip, the delegation came back to Germany with memories, insights, and also many questions. Quo vadis Vietnam? Dare for more capitalism? More rule of law? The party is certainly omnipresent. It remains to be seen to what extent the high proportion of young people, with their experiences abroad and their use of social media, will push for economic as well as social openness.

XIV Study Trip to the P.R. China
Scroll to top