The Global Bridges Berlin Symposium was held for the second time from the September 23 to 25, 2018, under the motto “Klartext in der Politik”. The aim of the event was to give Global Bridges members the opportunity to talk directly with politicians in the current government in Berlin and to discuss contemporary and controversial topics within a confidential circle. 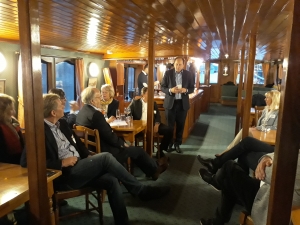 The Symposium kicked off with a private boat trip along the Spree with guest speaker Alexander Graf Lambsdorff, Member of the Bundestag and Deputy Chairman of the FDP Fraction responsible for foreign, security, European, and developmental aid policy, as well as member of Global Bridges’ International Advisory Board. Speaking in the boat’s cozy interior, Mr. Graf Lambsdorff offered a fascinating inside view into the world of the Bundestag, the power relations between Brussels and Berlin, and the key priorities of the new government.

Our first round of topics began the following morning, starting with a panel discussion on the topic “#Opportunities for Digitalization” with Members of the Bundestag Manuel Höferlin, Chairman in the Committee for Digital Affairs (FDP) and Tankred Schipanski, Digital Policy Spokesman (CDU / CSU), as well as Benjamin Brake, Director of Government and Regulatory Affairs of the IT Group, IBM. The event was moderated by Global Bridges member Stephanie Adam, Senior Consultant at Apricum. 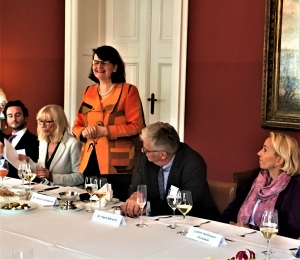 During the midday meeting, which took place directly opposite the Reichstag at the legendary German Parliamentary Society, Dr. Maria Flachsbarth, Parliamentary State Secretary for the Federal Ministry for Economic Cooperation and Development, spoke on “Development Policy: Quo vadis?” and reported on her impressions and insights following a recent trip to Kenya and Rwanda – the same destinations to which Global Bridges travelled during their first Study Trip to the African continent. After the State Secretary’s speech and the ensuing discussion, Judith Helfmann-Hundack, Head of Foreign Trade and Development at the German-African Business Association, presented her work. The German-African Business Association actively supported Global Bridges in preparing their first trip to Kenya and Rwanda. 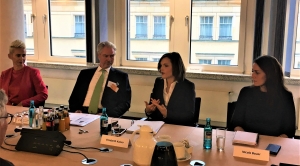 The afternoon program commenced with a lively conversation with three Members of the Bundestag, each of whom reported on their first legislative period under the motto “New in the Bundestag”. Silvia Breher (CDU), Nicole Bauer (FDP) and Elisabeth Kaiser (SPD) – all originally from the business world – gave vivid impressions and examples of the everyday challenges and expectations of life in the Bundestag.

Afterwards, in the offices of Global Bridges, a panel discussion on “Fact or Fake” took place behind the backdrop of the Brandenburg Gate. Two media representatives, Cecil von Busse, Office Manager of the BILD editor-in-chief, and Politico Europe correspondent Matthew Karnitschig, sat together with members of the Bundestag Dr. Florian Toncar, Parliamentary Manager (FDP), and Dr. Johannes Fechner, Chairman of the Committee on Legal Affairs and Consumer Protection (SPD), for a question and answer period with our members.

That evening, on the energy company EWE’s beautiful premises overlooking Pariser Platz, Dr. Norbert Röttgen, Chairman of the Foreign Affairs Committee (CDU / CSU), wrapped up the first day of discussions with an open and honest talk on the topic “Break Up of the International Order – what can German foreign policy do?”

The final day began with a breakfast discussion on “Fiscal Policy – Between Claim and Reality” with Members of the Bundestag Ralph Brinkhaus, Party Chairman (CDU / CSU), and Anja Hajduk, Deputy Party Chairwoman (The Greens), followed by an art history tour of the Bundestag to conclude the 2018 Berlin Symposium.

All in all, with its multitude of interesting topics, forthright assessments and viewpoints from the political ranks, as well as clear expectations and requests on the part of our members, the symposium was a complete success. These two days have once again shown how important it is for Global Bridges – in addition to facilitating exchanges with other countries and cultures – to promote dialogue between the worlds of business, science, culture, media and politics within Germany.