On Thursday 4 June, Global Bridges members came together for a video conference on the topic “Europe in crisis: how is the European Union holding together?”. Guest speaker of the evening was David McAllister, MEP and Chairman of the Foreign Affairs Committee, who provided the participants with an exciting and insightful impression of current challenges the European Union is facing. The discussion was moderated by our member and Young Leader Dr. Daniel Bloemers, who works as a policy officer for international relations at the European Commission.

“There is no doubt that this pandemic is by far the biggest challenge since the beginning of our cooperation with the Treaty of Rome in 1957”.

David McAllister began with an insight into the current “hybrid” way of working in the European Parliament. In part, the Members of Parliament take part in the sessions via video conferences, in part they are sitting together in the same room again. According to McAllister, this kind of cooperation works, but “by no means can it replace the personal conversation that is urgently needed in politics”. 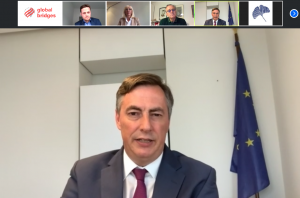 The pandemic had got everyone on the wrong foot – this applies to the Member States, the European Union and the whole world. However, many problems that appeared at the beginning of the crisis were not caused by politics in Brussels. For example, Member States would have rushed to close their borders, thereby disrupting urgent supply chains and disrupting the routes of many commuters. It was the European Union that pointed out that the single market was the backbone of economic development and ensured that express lanes were implemented to avoid interruption to supply chains, McAllister said.

“If you had asked me half a year ago: ‘Will the European Union provide rescue packages worth 2.4 trillion euros over the next years?’ I would have declared not only you, but honestly also myself to be crazy”.

According to McAllister, the European Union very quickly agreed on the need to develop a European Recovery Plan/Fund in the course of the Corona crisis. It is based on the Multiannual Financial Framework. It must be completed by the end of this year, otherwise the Member States have no planning certainty, McAllister said. The sooner the priorities and sums of the Multiannual Financial Framework are defined, the sooner local authorities, federal states, small and medium-sized enterprises, agriculture, universities and many other sectors can begin with the operational implementation. 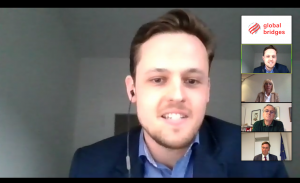 The EU reconstruction package amounts 750 billion Euros. In addition, an aid package of 540 billion Euros was already signed in March. Including the total volume of the next Multiannual Financial Framework, the EU countries would thus have 2.4 trillion Euros available to develop instruments for reconstruction, boost the private economy and develop a specific health program over the next years. According to McAllister, 2.4 trillion Euros is such a large sum, that there must be three aspects considered:

1. There must be an independent supervisory body to monitor the legality and appropriateness of the use of the funds.

2. The money must flow into future investments that can be implemented in a pan-European context (digitalization, modernization of industry, expansion of infrastructure, climate protection, etc.).

3. A deadline must be set for the start of repayments.

The EU Council Presidency is a huge challenge that will quickly push smaller countries to the limits of their administrative capacity, says McAllister. So, in Brussels there would be the expectation “if the Germans can’t lift it, who will lift it?”. Due to the Corona crisis, the biggest task will be the adoption of the Multiannual Financial Framework and the European Recovery Plan that is embedded in it. In particular, it will be difficult to get the Member States to vote by consensus and to obtain a majority in the European Parliament. This is made even more difficult by the fact that up to 70% of the Councils will take place in the form of virtual meetings. According to McAllister, up to 85% of the content could be discussed via videoconferencing, but the decisive sticking points and compromises could finally only be solved in personal meetings.

Other concrete projects for the German Council Presidency, which must be included in the Multiannual Financial Plan, are the European Green Deal, the promotion of the rule of law, the development of common ground in European foreign, security and defense policy as well as the implementation of the withdrawal agreement with the United Kingdom. 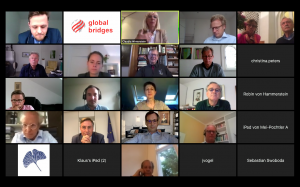 “A Europe without borders is such a gift from heaven”.

David McAllister is convinced that the abolition of internal borders and the adoption of the common currency have been the biggest and most significant steps towards integration so far. The crisis could be seen as an opportunity to show that open borders cannot be taken for granted and are the result of a visionary policy. It is time to strengthen common and solidarity-based awareness. Europe needs a common foreign, security and industrial policy that works efficiently and is comparable to the European trade policy. For Europe applies: