The article is also available in German here.

Mussolini invaded Ethiopia in 1935. Hitler invaded Czechoslovakia in 1938, Poland a year later to gain “Lebensraum in the East“. Two years later he invaded the Soviet Union with the aim of annexing Ukraine for a German “Ingermanland” and “Gotenland.” This tradition of violent land grabbing has been revived with Russia’s invasion of Ukraine. It has been reaffirmed by the annexation of four Ukrainian provinces (not even fully controlled by Russia) and the annexation of Crimea, already completed in 2014. Not only are the war aims similar; the brutal atrocities of the occupying forces also conjurs up images from 80 years ago. The bloodlands (T. Snyder) are bleeding again!

Putin wants to russify these territories. He denies the rest of Ukraine’s the right to exist and statehood, he denounces the government in Kyiv as “fascists” and a band of “Nazis”. Russian propaganda is in full swing. Broadcasts featuring Vladimir Soloviev, Dmitry Kiselyov or Margarita Simonyan are on a par with what could be read in the Völkischer Beobachter 80 years ago; official statements by Russian politicians (Putin, Lavrov, Medvedev) drip with hatred, resentment and a crude mixture of paranoia and national chauvinism. The parallels between Russia’s current leadership and fascist dictatorships of the previous century are becoming increasingly disturbing. Anyone who picks up George Orwell’s 1984 again today will recognise with a shudder a mirror of today’s realities.

Not only the future of Ukraine is at stake. At stake are the foundations of the international legal order, global security, geopolitics, the law of war, and humanitarian principles: 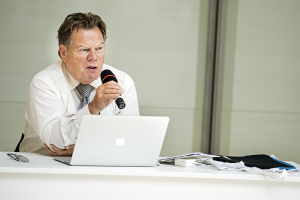 Putin drastically upped the ante at the end of September. By mobilising, he acknowledged that what he initially downplayed as a “special military operation” had escalated into a full-scale war. With the annexation, he has not only burned bridges to an understanding with Ukraine and the West, but also for his own retreat.

Putin is showing weakness, has his back to the wall, has no more options, it is said half with gloating, half with euphoric confidence. Wars, however, are not decided by single battles; nothing is more fickle than the fortunes of war. Putin still has reserves that he can mobilise. He has brought about the loss of options himself. Instead of proclaiming his failure, it would be more appropriate to ask how he will react when he is cornered. In an autobiography, he himself recounted how, as a youth in Leningrad, he had chased a rat and driven it into a corner; suddenly the fleeing rat turned around, jumped at him, and tried to bite his face. What matters is not what we consider rational, but what appears rational in Putin’s worldview.

And what could come after Putin? The possibilities range from an even tougher national chauvinist to a period of prolonged internal power struggles, civil war, and even state collapse. That a new Gorbachev will free Russia from this impasse seems the least likely of these possibilities.

What Putin’s strategic goals are remains unclear. The largest country on earth does not need additional living space. The fairy tale about security being threatened by Ukraine or NATO has been disproved by Russia itself. If NATO were really bent on destroying Russia, it would have long since exploited its current weakening. That Russia is withdrawing soldiers from its borders with NATO countries proves that Putin himself never believed his own fairy tale. The most striking images of this war show Ukrainian soldiers wishing Putin and his Russia to hell in accent-free Russian. So far, Russia has found few collaborators: Most civil administration officials in the occupied territories must be imported from Russia.

Russia is trying to intimidate the West with nuclear threats. So far, dealings between nuclear-weapon states have been based on mutual deterrence. However, it offers no insurance against first use, and certainly not against the command of an irrational politician. Rather, it offers a prospect of security all the more, the less doubt is justify that nuclear use will immediately and inevitably trigger reactions that inflict unacceptable losses on the aggressor. Those who give in to nuclear blackmail can only lose.

Putin sees the last hundred years fundamentally differently than we do. Therefore, his ideas for the next hundred years will remain incompatible with our values. Putin believes: Whoever has power over the past will also exercise it over the present and the future.

This war will drag on for a long time. The winter will test the resolve of both sides. In 2024, there will be presidential elections in the USA and Russia. They will be reflect the progress of war (unless Putin calls off the elections in view of the enduring conflict situation).

The corridor that leads to the end of hostilities and to an understanding on a new peace arrangement is getting narrower and longer. What seems likely today is depressing: Russia under Putin will retreat into self-imposed, nationalistic isolation. Communist ideology, after all, still had international appeal. The glorification of a russkij mir (Russian world) will find little appeal outside Russia. Even Belarus is showing restraint. Russia is threatened with creeping “North Koreanisation.

Even if Russia’s plans for conquest fail, it retains the option of slowing reconstruction efforts and imposing burdens on Ukraine that will wear it down in the long run. Russia cannot take Ukraine down, but it can give it constant pinpricks, putting it “in a headlock,” so to speak. Russia could continue to shell civilian targets in Ukraine, spread terror, engage in acts of sabotage, cripple critical infrastructure, and impede shipping on the Black Sea. Ukraine faces the threat of creeping “Palestinization.”

A mutually respected border demarcation is almost inconceivable after the September 30 annexations. The conflict is threatened with “Kashmirisation.” In Kashmir, 75 years after Pakistan’s separation from India, troops from both states still face each other with hostile intent. Since then, there have been four wars, and in 1999 the conflict led almost to the brink of nuclear war.

Whatever de facto borders of a residual Ukraine may look like in the future, it will join the Western economic space and Western security structures. In fact, Ukraine will have to remain part of the Western security space if it wants to survive. Neutrality, which was still conceivable before February 24th, is off the table. Putin has turned a “brother nation” into a neighbour full of bad memories, fear, mistrust and resentment for generations.

The future of Ukraine depends on how far the West will support and protect it in its hard, long, sacrificial defensive struggle and in its will to assert itself. Therefore, the future of the international peace order also depends on our determination to defend it – even if this might requires sacrifices also on our part.