This year’s annual festive holiday breakfast took place on December 14th on the top floor of the German House in New York City. The event was hosted by German Consul General, Mr. David Gill, in cooperation with Global Bridges. The guest of honor was Mr. Philip D. Murphy, Governor-Elect of New Jersey and longtime friend of Global Bridges.

Following warm welcome greetings to Phil Murphy and to his wife Tammy, as well as to all Global Bridges members and guests by David Gill, Beate Lindemann introduced Governor-Elect Murphy whom she met over 20 years ago when he worked for Goldman Sachs in Frankfurt. With a busy campaign schedule ahead of him, Lindemann was unsure if he would be able to accept her invitation so far in advance, as she extended it to him over half a year ago this past summer in Berlin! Despite the early request, Murphy was luckily able to make time in his busy schedule.

Murphy’s opening remarks recalled his and his family’s happy times and memories of the period of their Berlin posting when he served as US Ambassador to Germany.

In his remarks, Murphy gave an overview of New Jersey’s current economic situation: he spoke about the several priorities he and his incoming administration will need to address. These are numerous since New Jersey’s economy is in a somewhat serious condition (Murphy referred to the state’s economy as being partially broke). He also mentioned New Jersey’s critical Credit Rating. 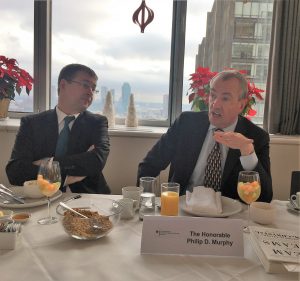 With its traditional as well as technology-based manufacturing and service industries and sectors, New Jersey has a population of circa 9 million people; it is one of the United States’ most diverse and densely populated states. The population consists, inter alia, of significant numbers of Muslims, Porto Ricans, Bangladeshis, Latinos, Jews, African-Americans, etc.

As Governor-Elect, Murphy’s urgent priorities include what he calls reigniting economic activities generally and specifically in several explicit areas. This includes but is not limited to: important infrastructure projects (i.e. rail, roads, bridges etc.), restructuring certain state taxes with a view to a fairer system, redirecting taxpayers monies to help kick-start key projects, and introducing labor, such as management cooperative initiatives and vocational training projects (he mentioned  what he observed and learned in Germany).

Governor-Elect Murphy will market international corporate/investors for Foreign Direct Investments (FDI) in his state, specifically from Germany and Israel. There is already significant German investment in NJ (BASF etc.), however Murphy feels more can be done. He expects to be able to leverage his contacts and network, specifically vis-à-vis German corporates. Additionally, Murphy sees significant potential for investments in NJ originating from Israel, especially in the various areas of technology where Israel is strong and typically seeks entry into the US market for commercial exploitation. To this end, Murphy is planning to visit both countries (however not before 2019) and start a marketing drive with further trips going forward.

Murphy spoke about his current efforts in building his incoming administration and the
types of individuals, talents, experience, backgrounds, etc. he is looking for.

Several topics dealing with legislation before and coming before Congress and White House/Trump Administration issues were also raised. Murphy did not hold back on his views on what has already, currently is, and what he expects will come out of D.C. He is obviously critical. The Trump Tax Reform currently going thru Congress was especially criticized by Murphy. He mentioned the Tax Reform legislation as one of the several examples of what he called the THEM and US policies of the Trump team. This will, in Murphy’s view, further divide the nation. Subjects including the Paris Climate Agreement, TTIP, TTP, NATO, Immigration, weak/disappointing leadership on the part of the Secretary of State were raised and addressed.

The meeting ended with questions raised by Global Bridges members (and answered by Murphy) dealing with various issues concerning NJ and the upcoming Murphy governorship as well as Washington D.C./Trump Administration on both domestic and international policies.

Murphy was in his usual energetic and positive form, talking freely and openly. He is clearly excited about the job awaiting him, yet realistic enough to realize the challenges, political fights, etc. awaiting him and his incoming administration. Global Bridges is sure that Murphy has a successful future ahead of him, and we would not be surprised to see him in the White House one day!