Topic: “Identify Bridge-Builder and Bridges of the 21st Centry”

On the occasion of the VIII German-Chinese Young Leaders Conference, about 20 German and 20 Chinese young leaders the fields of politics, business and the media came together to in early June to discuss current issues and get to know this beautiful region. As is the yearly tradition, the Chinese People’s Institute of Foreign Affairs (CPIFA) and Global Bridges jointly hosted the conference.

During the six-day conference, the participants passionately discussed the following topics:

1. Leading or Being Led – How Do We Perceive Each Other?

3. Leadership and Sustainability: Partners or Competitors? 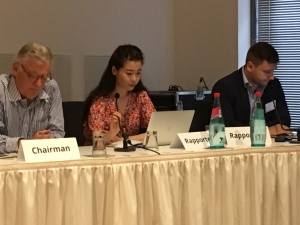 Each member of the working group was assigned a role in order to introduce the topic, moderate the conversation and present the results at the final plenary session. The discussions were particularly influenced by the different cultural perspectives of the two countries – however, the different fields of study from which the Young Leaders came also brought an interesting dynamic to the groups.

In addition to the discussion groups, the participants were introduced to the culture, politics and economy of the Saxony region by a large number of guest speakers and excursions.

During a dinner at the invitation of the Saxon State Chancellery at the State Winery Schloss Wackerbarth, the Young Leaders were catapulted into the time around the fall of the Berlin Wall. After a greeting of the head of the Saxon State Chancellery, Mr. Thomas Popp, Prof. Dr. Georg Unland, Finance Minister of Saxony a.D., gave a highly interesting lecture on the division of Germany. He incorporated his personal experiences into his stories, so that the Young Leaders hung spellbound on his lips. The Chinese participants, in particular, emphasized that the situation had never before been explained to them in such a vivid way.

Another highlight was the visit to the beautiful city of Freiberg and the associated Technical University Bergakademie Freiberg. An added must for the delegation was a visit to the museum “Terra Mineralia”, which has one of the most impressive exhibitions in the world. The highlight of the conference was a visit to the “Reiche Zeche” mine, where the Young Leaders had the unique opportunity to visit one of the largest tunnels in the Erzgebirge at a depth of 150 meters. The day ended with a delicious dinner in the 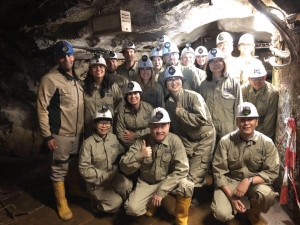 “Betstube” of the silver mine “Alte Elisabeth” in fantastic weather and with a view over the city.

The program also included a visit to Dresden with lunch in the Saxon Parliament building at the invitation of Dr. Matthias Rössler, President of the Parliament of the Free State of Saxony. Afterwards, the Young Leaders had the opportunity to get to know the city of Dresden through a sightseeing tour and steamboat trip on the Elbe. In an exuberant atmosphere, the day ended on the terrace of a typical Saxon inn.

At the end of the conference, the Young Leaders were invited to visit the Meissen porcelain manufactory. The delegation was received by Managing Director Georg Nussdorfer and led through both the workshops and the museum. The closing evening took place on the beautiful terrace of the manufacturing building. After impressive and heart-felt speeches by our hosts, the Young Leaders were officially accepted into the alumni network of Global Bridges through a ceremony where certificates of participation were handed out.

The relaxed atmosphere and many discussions contributed greatly to the fast friendships formed within the group, and both the German and Chinese Young Leaders sat together in the hotel bar until the early hours of the morning on the last evening in order to delay the farewell as long as possible. The network and friendships that have developed during these very intense six days will certainly last for a long time to come!