This year’s Study Trip to Russia was set on the backdrop of a few key objectives: 1) to obtain a perspective on the political status quo and mindset in Russia in light of recent years’ political tensions (and sanctions) with the Western World, 2) to learn about the technological activities in Russia in both the private sector and start-up world and 3) to put these themes into perspective with the developments in the West.

Arriving in Moscow with a German, federalist mindset, we very quickly were reminded of the centralist nature of Russia. In addition to the power-hub of the Kremlin – which was right next to our hotel – Moscow impressively demonstrated itself as the center of power through its House of Representatives of the Duma, a high-rise, impressive building with an immense number of (German-made) entirely black limousines in front of it. We would later learn about where and how these cars are produced.

As we eased our way into Moscow with a performance of a world-class ballet at the Bolshoy Theatre and our first set of cultural impressions at the Tretyakov Gallery, where we admired the cultural heritage and world-class artistry in front of us. The ironic element is that the Tretyakov Gallery’s approximately 2,000 works were acquired by Pavel Mikhailovich Tretyakov starting in 1856 as a private individual and was only later passed on to the state. This is somewhat mirrored today by the story of Garage Museum, a contemporary gallery founded and owned by Dasha Zhukova that is located in the middle of Gorky Park and attracts Moscow’s nouveau riche and tourists alike. Time will tell if her efforts will be remembered in a similar dimension to Tretyakov.

Traveling through Moscow’s underground train system – very much the bloodstream of this pulsing metropolis – we were not only inspired by the elaborate art on display there – which includes sculptures, frescoes and architecture in many of Moscow’s almost 200 stations (of which 44 are listed as cultural heritage sites) – but also reminded of the Cold War, with significant parts of the underground system built to also work as bunkers, if needed.

In our conversations with German representatives we learned about the importance of engaging with the small and medium sized enterprises (SME) sector. While large organizations and institutions are naturally close to the government, small and mid-sized businesses and organizations have more flexibility and leeway to engage with foreign actors. This impression was confirmed by the members of the German business community that we met and discussed with. Particularly impressive was our meeting with His Excellency, the German Ambassador to the Russian Federation, Ambassador Rüdiger von Fritsch, who offered us a tour d’horizon over his years in Russia and explained how he experienced the Russian developments in recent years.

We were treated to an outstanding dinner by Natalia Volodina, a Young Leader Alumna of Global Bridges and member of the executive board of Otto Group in Russia and her team. We learned a great deal about the German-Russian business relationship, particularly as seen through the eyes a leader in German international business corporations.

Visiting the Technological Hubs of Zelenograd near Moscow (and later Ingria Technopark in St. Petersburg) gave us an interesting glimpse into the start-up scene in Russia. Adding to our earlier impression, entrepreneurial activities are very much concentrated on the SME side – with larger state-owned companies researching and developing in-house. We got to know an interesting range of business ideas from shelf-stocking robots to interactive retail shop windows. All founders and entrepreneurs we met and talked to were very interested in connections to Germany – to gain both access to expertise, relationships and capital which we happily took up.

Another high-tech impression we gained was through visiting Mercedes-Benz’ brand new factory on the outskirts of Moscow. The factory was built in an astonishingly quick time-frame, spanning only three years from the planning phase to its opening – thanks to the productive combination of supportive local authorities and German project management and engineering. While the factory is still in its initial advanced ramp-up phase, producing at the moment only one color 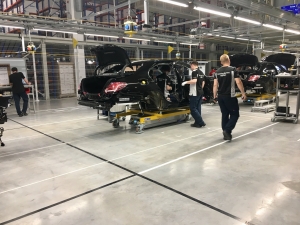 of car – black – based on our impression of the Russian luxury car market, it is unlikely to get a lot more colorful once operations are running normally.

Traveling on to St Petersburg by high speed train led us 500km north west from Moscow, which also felt a lot closer to the West or Scandinavia. Suddenly, our “White Nights” were a lot brighter and as we explored the city, it was sometimes difficult to tell whether we were in the streets of St. Petersburg or Stockholm.

Visiting the palace of Catherine the Great allowed us to see the legendary Amber Room, even though it was only a replica, which was kindly donated by German businesses. Finding our way through the vast palace, we also learned about the close links of Catherine the Great to China, with the Chinese Village attracting many visitors from the East. The Hermitage collection was absolutely impressive, not to say overwhelming, and it was naturally impossible to cover it in full. Unfortunately, this already marked the last item on our travel agenda.

With meaningful differences on the political agenda remaining unresolved, we left with the impression that while it is important to stand to our point of view and defend it, it is also paramount to continue to engage in a dialogue and ‘build bridges’ as this is the only way to – even if only over time – work on resolving such differences.

Report by Tobias A. Habbig