„China-Germany Relations in a Changing World“

Inner Mongolia? Not much is known about the northern province in China. Even for people from China it is a place full of mystery and legends mostly inspired by its famous leader Genghis Khan. No wonder Mongolia is called an empire won on horseback. 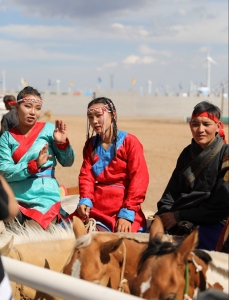 Curious to learn more about that mysterious place, the participants of the VII Chinese-German Young Leaders Conference were excited to meet in Hohhot this year, capital of the China’s North. About 40 participants with different career backgrounds in business, politics, government and media both from Germany and China came together for joint discussion. The Chinese People’s Institute of Foreign Affairs (CPIFA) as the long-time and highly esteemed partner of Global Bridges organized the stay in Hohhot. The head of the Chinese delegation was CPIFA Vice President Ambassador Liang Jianquan, who selected a group of Chinese Young Leaders from the diplomatic corps and media in China.

During the six-day conference the participants debated passionately about these topics. Vice President Ambassador Liang Jianquan more than once underlined the great importance of a better understanding between Germany and China and the young generation. “It might not be easy, but we don’t have another choice”, said Liang. Therefore, apart from the discussions within the working groups and panels, the 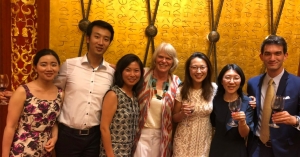 mutual exchange of the Young Leaders was the key focus of this conference. One of the highlights were the two days with excursions in the region. The Inner Mongolia Autonomous Region in the north of China covers 1.183.000 square kilometres, about 12 percent of China’s land area, which is nearly three and a half times bigger than Germany. It has 25 million inhabitants with Mongolians making up only about 15 per cent of the total population. The other 85 per cent are mostly Han Chinese and a small number of Huis, Manchus, Daurs and Ewenkis. The Inner Mongolia Autonomous Region is a province rich of natural resources. Vast areas are grazing land, but the region contains also one-sixth of the country’s forests. 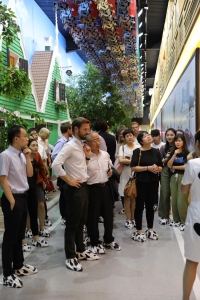 On the third day, we visited one of China’s biggest diary companies Mengniu Dairy Group. It is among the 20 biggest dairy companies worldwide and co-leading the market in China. A translator by the Foreign Affairs Office of the People’s Government of Inner Mongolia Autonomous Region Office gave the group a tour through the company. China became a major consumer of dairy products during the last decade. By 2012 more than a quarter of the total dairy production worldwide was consumed by China. With China’s dairy demand forecast to grow up to 40 per cent to 76 billion dollars until 2025, China’s companies invest great sums in their supply chains through foreign acquisitions as well as new technologies and automation. The company has invested more than two billion dollars in acquisitions of local companies in China since 2014.

Other highlights included a bus ride to the Grassland in Ulaanchab in Inner Mongolia, around a five hours ride away from China’s capital Beijing. The group took the time to stop at the riverside of the Narson River. 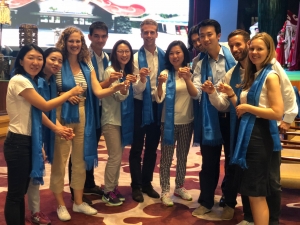 The river is 95 kilometres long and one of the most beautiful spots in Inner Mongolia. Afterwards the group drove to the Pine Grassland Vacation Village where it was welcomed by horseman and traditional Mongolian musicians. As part of the welcoming ceremony, staff from the village prepared blue hada (also khadag or hatag), a traditional ceremonial silk, and silver bowls filled with alcohol. Offering the hada to guests is a token of auspicious blessings in the Mongolian culture. It is originally coming from the Tibetan culture and common in cultures influenced by the Tibetan Buddhism. In Inner Mongolia, the silk is usually blue, not white like in other areas, to symbolize the blue sky of the region, which also gave Hohhot its name: The providence’s capital name is Mongolian for “Blue City”.