At the beginning of November 2016, in the final rally of the US presidential campaign, delegates of Global Bridges arrive in Bowling Green, Ohio, 82 miles southwest of Detroit and 180 miles north of Cincinnati. Why would one choose such a remote location? It is right here, in the swing state of Ohio, where no presidential nominee who later became president, has lost since 1964.  Since 1896, Ohio has picked the loser only twice.

Abandoned buildings, closed shops and just a few pedestrians in the inner city of nearby Toledo reveal the difficulties plaguing this area, better known as the “rust belt.” The common denominator of meetings with mayors, local politicians and campaigners from both the Democratic and Republican Party is the impression that very little has been accomplished to improve the situation in the region.

A brief visit to the Lucas County Election Board explains the need to us for registration before voting. If one has not voted in four consecutive years, an individual becomes automatically inactive. Only 65-70% of the people who are allowed to vote are actually registered, and of that percentage, only 70% vote, i.e. the maximum yield is 49%. This may help to understand the relatively low participation rates in US elections, which is on average 54,5% of the eligible voting population since 2000 vs. 74,7% in Germany for the same period.

While both parties use comprehensive data analysis on their electorate, “grassroots work” still involves information gathering by going from door to door. To identify and win over their potential voters, the Democrats largely rely on the help of unions. The Republicans have set up “Trump Victory Centers” to reinforce their presence and political message. Candidates of both parties make use of “Super PACs”, a kind of political-action committee, which can raise unlimited funds from corporations, unions, individuals and associations to support their case in the elections without disclosing their donors. Ironworkers supporting Democrats and housewives picking up telephones for the Republicans; this is not “big money” on either side. Instead, we listen to a mother who had to give up working to become eligible for state funded support to pay off the hospital’s bill for the medical treatment of her son. We hear from a logistics worker who lost his job and is being forced into early retirement with just 40% of his former salary. To summarize the sentiment among the former middle class, a friend of our host in Cincinnati states, “People feel that the social contract is broken; the American dream no longer works out as it has done in the past.”

Drawing on this notion we hear Bernie Sanders, a left wing Democrat, giving a rousing speech to 1,000 students at the Cincinnati University. He promises that a Hillary Clinton administration would bring down the cost of education by various means. Mr. Sanders does not explain how such measures will be financed. He recognizes global warming and its denial by Donald Trump, who said this phenomenon was a “hoax”. “We don’t think it is a good idea to throw 20 million Americans off of health insurance,” Mr. Sanders says, addressing one of the main goals of the Trump agenda to a frantic crowd.

While some of us prefer to watch the Hillary Clinton rally in urban Detroit City, others of us attend the Trump rally in an open hangar at the Airborne Airpark, Wilmington, ironically located in Clinton County. Early arrival and four hours of waiting ensure a reasonable view among 3,000 spectators. Their composition proves German media reports that Trump supporters are mainly “white, old, angry men” simply to be false. Among others, a praying reverend expresses his clear support for Donald Trump. Then Mr. Trump’s jet plane lands and stops just 200 yards away from the audience while the cheering crowd is listening to the soundtrack of “Air Force One”. Trump steps down the gangway, walks at a leisurely pace to the stage and waves to the cheering audience. The orchestration reminds us of the savior coming down to solve the earthly problems, specifically those in Wilmington. 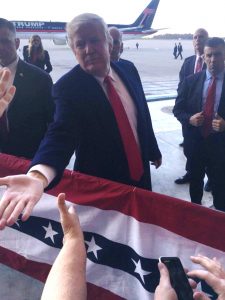 His speech addresses what the audience expects. “Can you imagine four years of Hillary Clinton … four more years of ISIS, four more years of higher taxes, four more years of nothing but problems in addition to all the legalities that she’s done?” Partly interrupted by the crowds frantic yelling, “Lock her up, lock her up!” Mr. Trump vows to repeal the federal Affordable Care Act. Reflecting widespread concern for immigration, he promises to raise barriers to entry for foreigners as well as a wall on the Mexican border to be paid for by the Mexican government. He insists on renegotiating the North American Free Trade Act, repealing the Trans-Pacific Partnership trade deal and abandoning the TTIP talks with Europe. All of these he blames for so many job losses in the US, specifically in Ohio. He continues on better care for the veterans and law enforcement agencies, an improved educational system and finally modernized US forces. The latter, he says, is necessary to bomb ISIS out of existence, which undoubtedly was unleashed by Hillary’s meddling in foreign policy. In short, the Trump administration would put the American interest first and make America great again. It is he who would rebuild the American dream. Donald Trump remains unspecific about how he wants to achieve all these goals.

160 miles further north, in the halls of Eastern Market, our members stand in the front row, thanks to the kind support of the Michigan campaign organizers, and listen to introductory speakers such as reverend Wendell Anthony, who performs a remarkable rap on the election campaigns in favor of the two candidates. While the last verses sink in, Hilary Clinton enters Shed 3 in a very presidential manner. Shaking hands left and right, nodding and smiling at familiar faces in the crowd and radiating a very “this is exactly the place I am meant to be at the moment“-aura. Her supporters greet her with loud cheers, and she addresses almost every group in the shed directly during her speech. Her main topics are the generation of growth and prosperity for the Detroit area, education for its children and adequate support for all the families and especially the mothers. 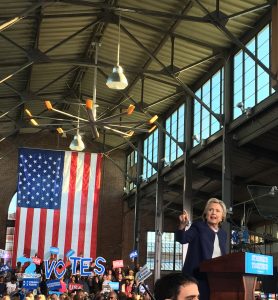 She calls out to all the supporters not to lose faith during those last days and to convince family members, coworkers, neighbors, and really everyone to go out to vote and show that “love trumps hate“. Hillary Clinton reminds her supporters of what she had already accomplished and how she wants to continue to fight for each American every coming day during her presidency. She finishes the event by showing that we really are “stronger together“ and enters the audience to give a handshake or a hug to many of her supporters. Suddenly she does not seem so distant and tense anymore.

Finally, at the end of our field trip to the US, we take a tour to the poverty-stricken suburbs of Detroit. We are asked by our local drivers not to take any photographs since people’s reaction might not be too friendly. We see abandoned homes and run down neighborhoods. Police patrols have been suspended. One in ten homes is suffering from crime. Yet, in the center of the city, the remnants of Detroit’s past glory are visible and so are the first encouraging accomplishments of urban initiatives to create the “New Detroit”. But the loss of so many manufacturing jobs in the “rust belt” and the neglect by the Washington establishment seems to have prepared the ground for the Trump movement “Make America Great Again”.

III Study Trip to Ohio for the last days of the US Presidential Election Ca...
Scroll to top