On Wednesday, May 15th, Global Bridges members, young leaders and friends came together in the offices of the Afrika-Verein der deutschen Wirtschaft e.V. to discuss the economic opportunities, challenges and developments in the African countries of Ghana and Ethiopia. Set as a lead-up to the Study Trip to Ethiopia and Ghana in September 2019, our Afrika-Verein moderators Tara Méité, Manager West Africa, and Ambassador (ret.) Egon Kochanke, Diplomatic Advisor, set th    e stage for these rising African powerhouses.

The guests were treated with in-depth presentations from experts both in the political sphere and business developments. The group was delighted to hear insights from Ambassador Gina Ama Blay from Ghana, Ambassador Mulu Solomon from Ethiopia and Mulu Worku Yimer, Deputy Head of Missions for the Embassy of the Democratic Republic of Ethiopia in Germany. From the German perspective, Dr. Stefan Oswald, Ministerial Director with the German Federal Ministry for Economic Cooperation and Development (BMZ) and Dietmar Roller, Chairman of the Board of the International Justice Mission Deutschland e.V., gave their perception into these growing economies in the panel discussion and resulting Q&A. 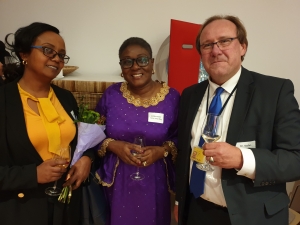 According to the introduction by Ambassador Kochanke, both Ghana and Ethiopia are “African Tigers” – countries with ever-rising importance to the shared economy of the African continent and to that of its international partners, like Germany. As he mentioned, Ghana is seen in West-Africa as the regional leader, both in terms of its economic relations abroad and its security value at-home. Ghana’s economic ties to Germany are long-standing, noted Kochanke, and are growing more prevalent with the recent African Business Summit and increasing trade agreements forged with Berlin. Similarly, Kochanke explained that Ethiopia was the first African country to establish diplomatic relations with Germany, and has remained a strong partner on the continent ever since.

Ambassador Gina Ama Blay began the evening’s discussion by giving the group insight into Ghana’s sustainable growth. She noted that Ghana has provided many opportunities for foreign investors, including incentives like tax holidays and corporate tax breaks, which has led to many European, Chinese and American companies setting up shop in Accra. Additionally, Ambassador Blay noted that the government of Ghana is working with international partners to ready itself for the challenges that lie ahead – as a German partner country, this includes bilateral programs to provide a better future for the country’s youths, such as the current initiative to end electronic dumping in Ghana. “We are like the Global Bridges’ slogan, ‘We go there’,” said Ambassador Blay of her country’s success – “Ghana is moving forward.” 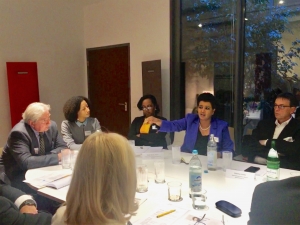 central theme of the evening. Ambassador Mulu Solomon and Ms. Mulu Worku Yimer explained that Ethiopia’s double-digit growth in gross domestic product over the past two decades has to do with the government’s ambition to transition from an agricultural society to an industrialized economy with a higher standard of living by 2025. To achieve this goal, Ethiopia is investing a great deal of time and money into job creation and attracting international business. Yimer noted that, before the take-over of the current government, such shifts towards modernization would not have been possible. With the new regime at the helm, Ethiopia is driving forward with its development goals and able to invest in its own infrastructure, with some help from German hard-hitters like Siemens AG and KfW. The ability of Ethiopia to make such rapid changes, explained Yimer, is due to the abundance of workforce, wage-competitiveness and access to large international markets. “What sets Ethiopia apart as a trade partner in Africa,” said Ambassador Solomon, “is our natural abundance and unique perspective as a country.”

From the viewpoint of the German Federal Ministry for Economic Cooperation and Development (BMZ), Ethiopia and Ghana are two of Germany’s closest economic and security partners on the African continent, reported Dr. Oswald. According to him, the population in Africa is expected to double by 2050 which means that the 20 million new jobs must be created annually to integrate the new workforce. Germany and other European countries have the chance to maximize on this market-growth by investing in the private sector and bringing European businesses to Ghana and Ethiopia. 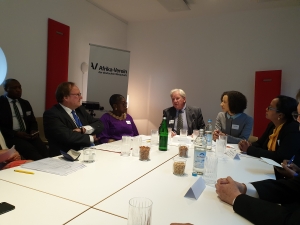 Dietmar Roller, who brought a more humanitarian perspective on the German-Ethiopian and German-Ghanaian relationships, noted that for these countries to move forward with their European partners, issues of education and job security at-home must be prioritized. “You have two counties with a well-educated population who see no perspectives in their home countries,” said Roller. In his opinion, Germany and Europe should invest more in job-creation by bringing businesses to Ethiopia and Ghana.

The panel discussion was followed by a lively Q&A that ran the gamut from rule of law and Chinese investment in Africa to the nitty-gritty of investment policy and sustainability. While each panel member gave the audience a different view on the economic development of Ghana and Ethiopia, they were in agreement on one central issue: the economic growth of the African continent has resulted in large part from the successes of these two “African Tigers”, and Global Bridges is fortunate enough to soon find out why.