Is blockchain a revolutionary technology of the future? Is it going to change the world – and if yes – how? What is fleeting and what is permanent? These central questions guided the presentations and subsequent discussions at the Global Bridges’ XXXII Berlin Global Forum titled, “Bitcoin – Blockchain: From Sensation to Rehabilitation.”

The evening began with an introduction to blockchain technology from Global Bridges member Stephanie Adam, a Senior Consultant at Apricum – The Cleantech Advisory. The theme of their presentation centered on the advantages and disadvantages of blockchain technology compared with central data management methodologies and popular use-cases, using case study examples from the energy sector. 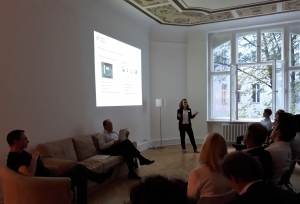 Keynote speaker Felix Hufeld, President of the German Federal Financial Supervisory Authority (BaFin), followed the introduction with a speech about cryptocurrencies, and the chances and risks of blockchain in relation to the finance industry. He broached the issue of the tension between promoting innovation and regulatory requirements.  He explained that innovations need space at their inception in order to develop and thrive. Giving innovation room is a distinguishing characteristic of a market economy.

In order to be able to effectively protect the rights and interests of the consumers and investors, as well as to preserve the general stability of the finance market, it is important, says Hufeld, to not only understand new technologies down to the last detail, but also to follow technological advances closely. A task of the BaFin is to recognize potential risks early on and to emphatically appeal to customers to take these risks seriously. Specifically, the investment in so-called “Initial Coin Offerings” (ICOs) are currently highly speculative and are laden with risk. Despite these potential risks, however, blockchain has the potential to turn the finance industry upside down – even if it is too soon to determine what exactly is temporary hype and what will have a permanent effect. 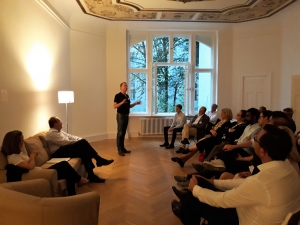 The final speaker of the evening, Mark Turrell, CEO of Vork, then spoke about ICOs. He addressed the role of this new funding method along with the challenges and risks it presents. In addition, he discussed innovative approaches which would create attractive “security tokens” for investors within the scope of an ICO, that would fulfill all relevant regulatory requirements.

A panel discussion followed to wrap of the evening, moderated by host Jan Kallmorgen, CEO of Berlin Global Advisors. The topics presented over the course of the evening were controversially and intensively debated, with many questions and interjections coming from the audience. One thing we know for sure: even if no one can precisely predict which direction the bitcoin-blockchain road is going, and even if the current pro-con opinions vary vastly from one another, bitcoin and blockchain remain technologies that have had an immense effect on the world and the global economy.