“Uzbekistan: A Country in Transition”

Uzbekistan has served as a crossroads of civilizations for millennia. It was an important player in the Silk Road trade, has been part of numerous major world empires, and is now situated in the heart of modern Central Asia. This made Uzbekistan an ideal location to convene 38 young leaders from 12 countries for Global Bridges’ XVII European-American Young Leaders Conference at the end of May 2018.

During their time in Tashkent, the participants encountered a nation at a critical juncture in its history, exemplified by the conference’s title “Uzbekistan: A Country in Transition.” After more than 25 years in power, Islam Karimov, the country’s first president since its independence from the Soviet Union, died in 2016. An autocrat, who ruled the most populous country in Central Asia with an iron-fist, Karimov suppressed political dissent, sanctioned widespread human rights abuses, condoned rampant corruption, and implemented isolationist policies. Elected in late 2016, new President Shavkat Mirziyoyev quickly introduced a sweeping five-year development strategy in early 2017, which focuses on improving the country’s political and judicial systems, economy, quality of life, and foreign policy. 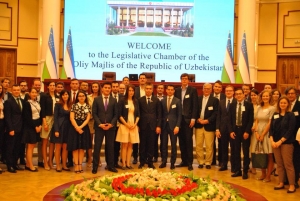 German Ambassador to Uzbekistan Günter Overfeld told participants they had come to the country at a “very crucial time” and emphasized the rapid pace of change.

“I must really tell you the speed of which things have developed here,” he said during a dinner hosted at his residence. “The reforms that have been undertaken after a long time where Uzbekistan has been very much closed have been remarkable.”

The impact of the development strategy served as a central thread running through the young leaders’ working group discussions. Uzbek participants shared their invaluable knowledge of their home country and perspectives on the current reforms with colleagues from Argentina, Austria, China, Estonia, France, Germany, Hungary, the Netherlands, Russia, Serbia, and the United States. Participants also examined how the development strategy might address Uzbekistan’s role in the region; its relationships with major world players including Russia, China, the European Union, and the United States; and the challenges it faces in trade, investment, and economic development. 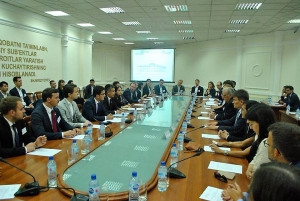 The discussions were supported by talks about the country’s development efforts and its history from guest speakers including Dr. Vladimir Norov, director of the Presidential Institute for Strategic and Regional Studies; Jasur Salomov, a historian at the Uzbek Institute of History; and Rahim Hakimov, a member of Parliament and director of the Legislation and the Parliamentary Research Institute. Hakimov also hosted them on a visit to the Oliy Majlis, Uzbekistan’s parliament, where he discussed the structure and responsibilities of the legislative branch. In addition, Hakimov explained his role as the head of the new Institute of Legislative Issues and Parliamentary Research, which aims to improve legislation by analyzing proposals submitted to the Oliy Majlis.

A day trip to Samarkand, gave the group the chance to experience a place where Uzbekistan’s past and future converge. The country’s second largest city, Samarkand prospered as a major trading post on the Silk Roa

d and as the capital of the Timurid Empire. Now, like much of the country, it is working to attract international investment and diversify its economy. The participants’ got a glimpse of this on their tour of the MAN Plant, a joint Uzbek-German venture, which produces vehicles for commercial trucking.  In the afternoon, they visited some of Uzbekistan’s most famous landmarks in Samarkand’s old city, including the mausoleum of Amir Timur, founder of the Timurid Empire, and the Registan, which features three ornate madrasahs from the 15th and 17th centuries.

In the final conference sessions, the young leaders discussed what they had learned about Uzbekistan over the past few days. They found that some elements of the country’s development strategy had already yielded a positive impact on the economy and government, including currency liberalization, easing foreign visa restrictions, and reducing government monopolies. However, some significant issues remain, including public corruption and lack of transparency; poor infrastructure; an absence of genuine opposition political parties, and the use of forced labor in the cotton industry. The young leaders were hopeful that the current rapid pace of reforms would continue, but cautioned that careful planning and implementation are needed to ensure true, sustainable change that benefits all of the country’s 32.3 million citizens.