While the festivities of the 70th anniversary of Israel’s independence took place, our Global Bridges Delegation began its VI Study Trip to Israel and the West Bank.

The group arrived in Israel amidst the protests and aftermath that ensued as a result of US President Trump’s announcement officially recognizing Jerusalem as Israel’s capital. Our many meetings and encounters with fascinating personalities allowed the group to receive firsthand insight to a region where it is debated like nowhere else, how politics could or should be conducted differently.

II. The Political Relationship between the State of Israel and the Palestinians

Disillusion prevails. The negotiations between the Israeli government and the Palestinians, formally represented by the Palestinian Authority, are stagnant. In the meantime, the building of Jewish settlements in the regions of Judea and Samaria is confirmed, a controversial project which is even disputed within Israeli society. David Akov, the Head of the Center for Policy Research in the Ministry of Foreign Affairs, explained to the group that Israel needs these military-protected settlements as a form of a “safety belt.” Moreover, asserted Gershon Baskin, founder of the Israel/Palestine Center for Research and Information, that Jews have a right to pray on their Holy Land. On the other hand, the settlements threaten the existence of a future Palestinian State, which can only be deemed “full standing” once it has complete control over the state borders and their respective territories. This would mean the existence of a state not infringed upon up by the settlements, separated by bypass roads and checkpoints, or occupied by military installations. 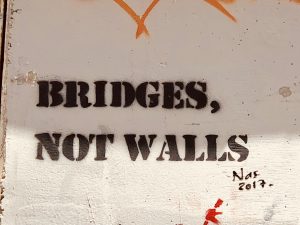 By expanding upon the existing settlements (and continuing to build new settlements) Israel is endangering the guiding concept of a “Two State Solution,” explained Rabbi David Rosen, the Director of the American Jewish Committee in Jerusalem. He also emphasized that the alternative concept of “One State,” is nonnegotiable. Crucial to this dilemma is Israel’s self-perception as a Jewish land. A former visionary of a “one state” Israeli solution, Theodor Herzl, conceived that this solution should be reciprocity for Jews as a minority group, and that as national collective group, Jews should not be dependent on the goodwill or resentment of another sovereign. An issue with Israel acknowledging and awarding the Palestinians the “Right to Return” along with legally defined equality, is that in doing so, Israel would have to forsake its own founding principles. A debate about possible federal forms of government could help the situation, although have yet to be met with approval by the citizens and residents of Israel and Palestine.

The persistent rivalry between the political parties Fatah and Hamas hinder not only the bargaining power of the Palestinians against the State of Israel, but also threaten the legitimization of the Palestinian National Authority and its institutions. The Palestinians are resigned and frustrated, reported Marc Frings, the Director of the Konrad-Adenauer-Foundation of the Palestinian Territories in Ramallah. They have little trust in the President of the Palestinian National Authority, Mahmud Abbas, and his government, explained Propst Wolfgang Schmidt, a representative of the Church of the Redeemer in Jerusalem. Meanwhile, the situation in Gaza, a city controlled by the Palestinian Sunni-Islamist fundamentalist organization, Hamas, continues to worsen. 80 percent of the citizens in Gaza rely on some form of humanitarian aid and support from international organizations (predominantly from the United Nations and European Union). A main cause of this is deficient electricity paired with an insufficient water supply, which fosters outbreak in disease. However, despite the current violent protests, an “Intifada” is not expected to occur, mostly due to the fact that both Fatah and Hamas accept the current “status quo” and are, themselves, authoritative in their actions. 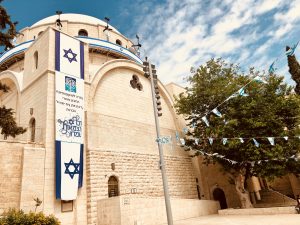 III. The Society in Israel: A Passion for Debate

The celebration of Yom Ha’atzmaut, Israel’s Independence Day, as according to the Hebrew calendar, took place on April 19, 2018.  Member of the Knesset and Minister of Culture Miri Regev opened the ceremony, surmising that more than in any other society in the world, there is a deep mix of old and new in Israeli society, between religion and modernity, between spirit and substance, and perhaps exactly that is the secret of [their] power. The various encounters during our study trip allowed us to experience this diverse society, such as the varying lifestyles between secular Jews versus orthodox Jews. Furthermore, the atmosphere in the Holy City is different from the mood in the Mediterranean city of Tel Aviv or in the Kibbutz Migwan in the remote town of Sderot on the Gaza Strip.

While in Kibbutz Migwan we met with Nomika Zion, one of the founders of the organization “Other Voice,” who shared her personal hardships and stories of the war with us. Since the start of the violent uprising of the “Al-Aqsa-Intifada“ (Second Intifada), Sderot, which is near the area of Gaza controlled by Hamas, has been subject to frequent rocket attacks. During our meeting with Ms. Zion, she lamented that the Blockade of the Gaza Strip enacted by the Israeli government encourages propensity for violence, and harms the prospect of peace.

Yehuda Shaul of Breaking the Silence also reported on the ever increasing differences of opinion between the politically progressive Israeli citizens who want to instate an agreement with the Palestinians, and those who are vehemently against this and who support Netanyahu’s politics. He briefed us on his organization, and explained that they denounce the war crimes of the Israeli armed forces. President Netanyahu, however, has accused Breaking the Silence as taking part in the criminalization of the armed forces. Journalist and ARD-Correspondent Richard Schneider, with whom we met at a restaurant in the artist’s quarter of Tel Aviv, also criticized the group for often not being able to properly back up their accusations. He explained that even many Israeli citizens who declare themselves opponents of Israel’s occupation policy find the radicalism of the organization disconcerting. We sensed that ultimately there is no consensus among Israel’s society as to what Zionism means exactly. This dispute continues to this day.

IV. Economy in Israel: Affinity for Technology and Entrepreneurial Spirit

Israel’s economy is prospering. The economic output increased by 3.1% in 2017, whereby inflation remained at 0.4% and unemployment at 4.1%. A vital component of Israel’s innovative economic sectors is the tech scene. There are only 8.5 million residents in Israel: despite this, Israel has listed 94 companies on the NASDAQ, proportionally more than any other country aside from the United States and the P.R. of China.

Israel’s propensity for technology was apparent during out tour of the CyberSpark facility in Be’er Sheva, which was especially fascinating. The business campus was founded by (and its expansion continues to be funded by) the “Israel Initiative ii2020,” which supports and promotes various economic hubs and businesses. The focus of CyberSpark’s campus is the cybersecurity tech scene, in comparison to other business centers who are explicitly focused on automation technology or agricultural technology. The campus is an excellent representation of the collaboration among the military, economy and research branches. Although the work between university researchers and military is generally distrusted in Europe, this type of collaboration is actively supported in Israel.  A good example of this is the upcoming relocation of the elite military intelligence group, Unit 8200, to the CyberSprak business campus. The economy magazine “Business Insider” named the group the “best high-tech-school in the word.” The establishment and encouragement of these business is supported by Israeli tax subsidies. A company that settles here (on the business campus) saves not only money, but also profits from the knowledge of the students and the veterans of the high-tech unit, explained Zafrir Levy, Director of Business Development at BGN Technologies.

In Jerusalem we met with Erel Margalit, one of the entrepreneurs who helped in establishing Israel’s reputation as a “startup nation.” His company, Jerusalem Venture Partners (JVP), has raised over 1 billion USD to date and has created and invested in over 100 companies, primarily in the spaces of digital media and mobile technologies. Individually he has listed 12 companies on the NASDAQ market. True to his life motto, “Yallah!” (“let’s go!”), he would like to propel the creation of a multitude of economic and business centers in coastal cities along the Mediterranean, from Cairo to Barcelona. In doing so, he trusts in and relies on cooperation with regional and local politicians, as he feels they can operate more pragmatically and progressively than national elected representatives.

Our meeting with Erel Margalit provided the group with hopeful optimism that if national state governments and international associations are unable to pacify the region’s conflicts, such visionary founders could help to break the “status quo” from the bottom up and force political reform. Once again, this year’s Study Trip to Israel and the West Bank, with its exciting and highly informative encounters, proved to be a highlight on the Global Bridges event calendar.