Fraught with exciting, new impressions and acquired knowledge, our Global Bridges delegation returned on April 15 from their Third Study Trip to Iran. Although the country is currently experiencing a boom, the economic crisis remains omnipresent. Over the past few years, the sanctions have isolated the country more and more from the outside world. Given these conditions, it was even more astounding for our group to experience the amount of hospitality and curiosity the local population demonstrates towards western travelers as well as how relentlessly this population has searched for solutions in order to create new perspectives.

Iran is a wonderful country, multi-faceted and simultaneously riddled with contradictions. Throughout our trip, we were given many opportunities to exchange with high-level dignitaries from the fields of politics and finance. These discussions were always open and honest, and they provided us with unique insights into the country’s difficult situation.

During our meeting with Dr. Ali Ashrat Afkhami, CEO of the Iran Security Organization and CEO of the Bank of Industry and Mine, our delegation received an insider’s glimpse into the unfiltered reality of the Iranian economy. Dr. Afkhami made a point to discuss the trade restrictions and sanctions initiated by the United States, which has created seemingly insurmountable challenges for Iran. Apart from this, however, he mentioned that the growing Chinese economy as well as the rapid progress of digitalization have also proven to be looming tribulations for the country.

Despite these problems, according to Dr. Afkhami, Iran has remained very successful in many areas. As an example, he cited the accomplishments of the state bank, whose ratings have improved remarkably over the past few years. Beyond this, the bank has also made crucial investments in the energy, oil, and chemical sectors. Another key focus of state financing has been infrastructure. The state bank has invested a lot of capital into the expansion of railways and the construction of the Iranian aircraft fleets. The middle class economy has also been supported by business credits. 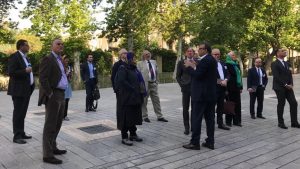 Dr. Afkhami, by now already a good friend of Global Bridges, surprised the delegation with an invitation to a subsequent, rich refreshment in the representative rooms at the bank’s top floor. He took the time to converse with each participant, all of whom received gifts from him, and expressed his sincere wish that they all return to Iran next year.

In the end, the noticeable improvement in Iran’s economic statistics since 2013 must not go unnoted. The GDP’s growth rate has risen from the negative digits to around 4%, the inflation rate has dipped from 55% (2013) to 10% (2017), the unemployment rate has sunk in the last few years, and the stock market has developed positively. This development was confirmed by representatives from German businesses in Iran during a reception at the residence of the German Ambassador to Iran, H.E. Mr. Michael Klor-Berchtold. It was mentioned on numerous occasions during the many one-on-one conversations that there are still tremendous difficulties in investment financing and payment transactions.

Apart from these experiences, our delegation had the chance to speak with Mohammed Khazaei, Deputy Minister of Economics and Head of OIETA, the Organization for Investment, Economic and Technical Assistance. He also pointed out the deficits involved in financing and foreign transactions, complaining that, despite the numerous dialogues with foreign delegations over the years, there has been little to no recognizable progress. 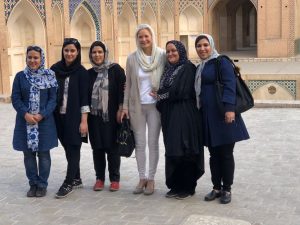 We quickly discovered that the youth in Iran plays a very large role – a generation that wishes to prove itself and refuses to be left behind by the rest of the world. More and more start-ups are establishing themselves in Tehran, such as Chapgha, which we had the opportunity to visit. The business was founded in 2016 and is currently the market leader in the field of online printing. Over 40 young Iranian women and men work here, where customer satisfaction is at 98%. The start-up Alibaba.ir, a travel portal for booking flights and hotels, is another example for the ever-growing youth work culture in Iran. The business was established in 2014 and to this day has taken on over 350 employees, which they proudly reported to our group. Like Chapagha, Alibaba.ir is also the market leader in its field and is currently valued at over 100 million USD.

Simultaneously, however, a third of all college graduates in Iran are not gainfully employed, and youth unemployment continually proves to be one of the country’s largest challenges.

Nevertheless, one observation quickly became clear to us: no matter where we went and with whom we spoke, everyone was striving for solutions and new perspectives, was eager to hear our opinions and learn from our expertise, all while dreaming of an Iran whose promising, economic potential will one day be brought to the outside world.

Every now and then, one runs into the occasional European who has settled down in Tehran as well. One example would be Michael Bitsch. Next to his work at the German-Iranian Chamber of Industry and Trade, Michael Bitsch established a successful business in Tehran. Another example, Manuel Ferdows, German-Iranian and Founder and Managing Director of Mammut Group, values Iran as an economic hub. He is one of the biggest names in the automobile and construction industry in the Middle East and has known the industry for a long time. The Iranians are greatly convinced by the high quality of German and European products, according to Ferdows. Volkswagen has largely entered into the region through him, and there should be up-to-date models from Volkswagen being built here in the coming year. “We produce 1.5 million vehicles; without the sanctions, it would be 2.5 million. Iran offers not only new challenges every single day, but also new opportunities.”

It is goes without question that Iran and the West have sustained a tense relationship since the fall of the Shah. The ongoing war in Syria as well as the conflict revolving around the nuclear deal also contribute to this friction. Gholamreza Ansari, Deputy Minister for Economic Affairs and Finances in the Department of Foreign Affairs, emphasized the difficult political situation Iran has found itself in the past few years. He gave an informative talk outlining the differences between Sunni- and Shia-influenced states, pointing out that, contrary to the many Sunni-states, a military attack has never originated from a Shia-state. 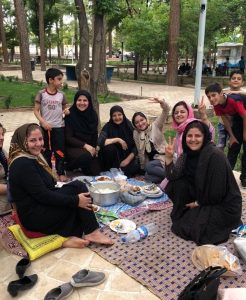 Under the motto “to change the game,” he calls for all military aggressions in the Near/Middle East to be ceased and that the infrastructure in those regional states be renovated. Ansari prioritized the cooperation with the West and especially the improvement of the financial opportunities and the easier accessibility of Western technology. In the subsequent discussion, the Deputy Minister addressed the misrepresentation of Iran, which, in the Iranian-Israeli conflict, has played an significant role. According to Mr. Ansari, one must clearly define the borders between Israel and its Palestinian neighbors before Iran would acknowledge an Israeli state.

Along with the thought-provoking stay in Tehran, our travels led the group to a few days spent in the Iranian countryside. Far away from the chaotic traffic lies the desert city of Yazd, the home of the Zoroastrian fire cult. Here we were given the opportunity to converse with government officials and experience moving encounters with the friendly inhabitants of this wonderful old town with its yellow mudbrick buildings. The people here, both young and old, were hungry for contact with western foreigners. 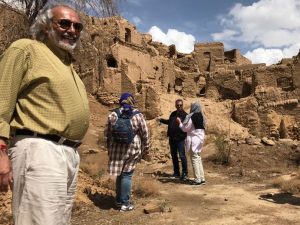 From Yazd we travelled further through the seemingly endless rocky desert to a steep hill somewhat 80km north of Yazd in order to admire the cave ceilings emerging from the source of the largest sanctuary of the Zoroastrians, Chak Chak. Overall, it was an incredible journey that Global Bridges organized for its members. The timing for this trip hardly could have been more ideal for open and honest exchanges with our Iranian hosts and discussion partners with whom many prejudices and other longtime misinformation were clarified.