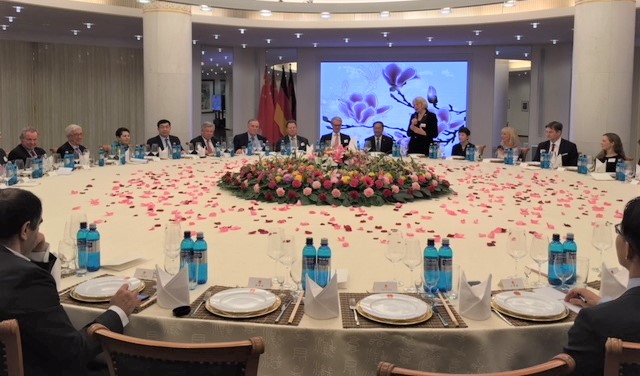 On Friday, January 26th, our Global Bridges Members once again enjoyed the gracious hospitality of the Chinese Ambassador to Germany, H.E. Mr. Shi Mingde, who invited them to dinner on the occasion of the Chinese New Year.

Ambassador Shi Mingde extended his well wishes to the Global Bridges guests in the spirit of both the internationally recognized New Year’s on January 1st as well as the Chinese New Year’s, beginning February 15th. He advocated close cooperation between Europe and China, free trade, and the reinforcement of multilateralism. These goals are even more important considering the growing unpredictability of the United States under President Trump.

Our Executive Chairman, Dr. Beate Lindemann, expressed her gratitude for the Chinese Ambassador’s renewed and exclusive invitation and for the excellent cooperation in the past years. In her opening remarks, she stressed that in 2018, Global Bridges, after already having visited 17 of the 22 Chinese provinces, is looking forward to exploring an 18th and very significant province in July, namely Tibet.

For the first time ever, this already well-established tradition was structured like a small seminar. As requested by our Chinese hosts, former German Defense Secretary Volker Rühe, Chairman of Global Bridges’ International Advisory Board, provided an overview of the current state of transatlantic relations. In his opinion, the severance of Europe from the United States would be a dangerous move: “We ally ourselves with the United States of America, not with a single person (Trump). The United States is a system of checks and balances. Regardless of whoever is sitting in the White House: the American people are not unpredictable,” stated Rühe.

The Chinese hosts asked the former Vice President of the German Federal Intelligence Agency, Dr. Rudolf Georg Adam, to share his thoughts on the future of Europe. In the wake of Brexit and the rise of the French President, Macron, Dr. Adam worryingly spoke of the gradual split between Eastern and Western Europe. Among other reasons, much of the friction between the two regions has been caused by a lack of clarification between refugees and migration. In this context, he quoted Confucius: “If language is not correct, then what is said is not what is meant; if what is said is not what is meant, then what must be done remains undone.”

Foreign policy Expert Dr. Rainer Stinner was asked for his insights on the current view of China in Europe. In his experience, the significant role that the long Chinese history has played in contemporary political decision-making is time and again highly underestimated in Europe. The means of power projection in China are also different, since they are influenced by the philosophy of the military strategist Tzu Sun: “Indeed, the one who does not fight is the victor.” In conclusion, one has to understand in the West that the Chinese dream is a collective one and not an individual one as is the case in the West.

The former President of the German Federal Intelligence Agency, Dr. August Hanning, warned that it could come to an unintended conflict from one of the Korean peninsula’s two sides, and that China, the United States, and Europe should mutually contribute to de-escalation. Ambassador Shi Mingde stated that the concern of a regime change caused by outside forces prevails in North Korea. The United States has taken advantage of these tensions in order to heighten their military presence in China. The upcoming Olympic Games will offer a window of relief that should courageously be seized.

Dr. Adam thanked the hosts with a brief speech in fluent Mandarin. Moderator Dr. Peter Strüven thanked the dinner attendants for the open discussion and concluded the evening with well wishes for the Chinese New Year, the year of the dog. This is a fitting symbol for the work of Global Bridges, since the dog is known both for its loyalty and attentiveness – two traits that we have ascribed ourselves as longtime observers of China.