For most of us, the term ‘robot’ brings to mind vivid images of car assembly lines, unmanned drones, or deep space. The term ‘artificial intelligence’ (AI), however, may be a bit more difficult to grasp. This software, which enables computers to learn independently, is quickly becoming the basis for future innovations in robotics, medical diagnostics and autonomous vehicles. In fact, AI is driving most of today’s technological innovations. Soon, it will shape every sector of the economy, boosting productivity everywhere from manufacturing plants to law firms. Additionally, AI will also play an increasingly central role in defense. However, the adoption of AI has also raised questions about its potential misuse as an instrument of social control, as well as the technology’s impact on labor markets.

On February 18, Global Bridges Members and Young Leaders Alumni met in Berlin to discuss how Germany and Europe can use their strengths to ensure that they do not lose touch with China and the United States in terms of artificial intelligence development.

Invited to speak on this fascinating topic were Mario Brandenburg, MdB and Chairman of the Enquete Kommission “Artificial Intelligence”, and Prof. Dr. Sahin Albayrak, Professor at TU Berlin, Founder of the DAI Laboratory and Chairman of Connected Living e.V.

Moderating the event was Christina Peters, Global Bridges Member and Young Leader Alumna, who began the discussion with a short overview of the status quo of AI in Europe, China, and the United States.

The competition for leadership in AI development is a two horse race, and the United States and China are fighting fiercely for supremacy. While the ground work of artificial intelligence research was conducted in the United States, AI technology is being rapidly adapted and developed in China with the help of massive investments by the Chinese government, cooperation between the state and leading tech companies, and access to large sets of personal data. AI technologies emerging from China include Sensetime, a face recognition tool used as part of the country’s new social credit system. 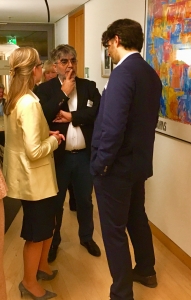 In terms of access to data, public confidence, and capital investment, the EU’s developments in AI seem meager compared to those of the United States and China. Only 4% of global data is stored on EU servers. Around 37% of the European workforce does not possess basic digital skills, i.e., are digitally illiterate. Despite these discouraging facts, Europe continues to be a market leader in robotics and is home to prominent research laboratories and universities. In May 2018, the EU passed the General Data Protection Regulation (GDPR), a law that has set a global legal precedent for the protection of personal data online.

By the end of the evening, all those in attendance agreed: Germany cannot afford to lag in developing new AI technologies. A greater willingness to invest in companies and start-ups utilizing AI, as well as bolster educational and research opportunities, is urgently needed. Now is the time to move forward with bold, new ideas and create a framework for future opportunities in AI.