Topic: “Kyrgyzstan in the Heart of Asia”

Kyrgyzstan, a landlocked country nestled in the sphere of influence of two major world powers, was the destination of this year’s European-American Young Leaders conference. The young nation experienced a turbulent past with two revolutions taking place in 2005 and 2010 and is now at the center of the Chinese “One Belt, One Road” initiative which made it the ideal place for the 38 young leaders to engage in discussions on the past, present and future of this beautiful country.

Being the only democratic republic among the form 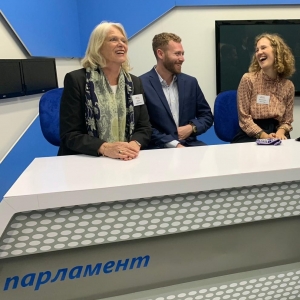 er soviet states in central Asia, Kyrgyzstan is still struggling to establish its place among its neighbors and resist the overwhelming influence of Russia and China. Pinned in between these two neighbors, the relative influence of Europe or America is insignificant.

The four-day program of the conference was opened by a dinner reception with opening remarks by Annunciata von Treu, Dr. Beate Lindemann and Dr. Hans Albrecht as well as the German Ambassador to Kyrgyzstan, Ms. Monika Iwersen. The context of the conference was set by a key note address on Kyrgyz history by Professor Cholpon Chotaeva, Coordinator of the Anthropology and Sociology Departments and Professor of Anthropology at the American University of Central Asia.

Beyond this, the working groups were informed by several other sources. The Deputy Foreign Minister Niyazaliev Nurlan visited the working sessions and elaborated on the role of Kyrgyzstan as the “center of democracy” in the region, the relationship to Russia and China, the significance of the “One Belt, One Road” initiative as well as the plans for future development in Kyrgyzstan. Dr. Alexander Wolters, Director of the OSCE Academy, gave an inspiring overview of the work of his institution: educating the future elites of the larger region. The input to the participants was rounded off by a dinner speech on climate and environmental protection. It was given by Nurzat Abdyrasulova, President and CEO of Unison Group. She elaborated on the efforts of her company in helping Kirgizstan develop an eco-friendly growth strategy.

Activities outside the working groups provided room for off-topic discussion and personal conversations: a visit to the Ala-Archa national park showed the participants the beautiful landscape of Kyrgyzstan a dinner in a jurte-restaurant allowed a glimpse in to the cuisine of the country. Visiting the Parliament and talking to a Young parliamentarian gave an exciting impression of the center of power and an idea on the work of the government. Beyond this, the participants also decided to spend the time outside of the conference together be that by exploring the city or singing karaoke together.

The conference was concluded by a farewell dinner which was kindly hosted the German Ambassador to Kyrgyzstan, 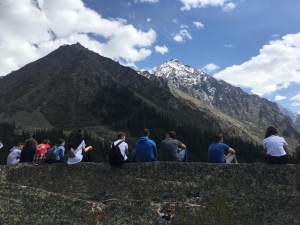 Ms. Monika Iwersen. Leaving Kyrgyzstan, it is uncertain if the young leaders’ analysis on the discussion topics were right and which way Kyrgyzstan is going to develop. Very certainly however, the conference did allow for personal growth of all participants and fostered a better understanding and friendship between all participants.

The personal connections were at least as valuable as the academic discussions – the personal relationship provided a solid basis for debating even controversial topics during the conference, but also resulted in certainly more than one friendship that will last way beyond the duration of the conference.