The main points of discussion were how China can keep the balance between innovation and political docility, as well as China’s expanding influence abroad and its implications for Germany and the European Union. Dr. Stanzel mentioned the Belt & Road Initiative (BRI) as a prime example of China’s increasing international influence through the development of land and sea routes across Eurasia and Africa.

Dr. Huorati addressed the question of what this all means for Germany and the European Union. According to him, Germany has been very successful with China so far, but that success is fragile. 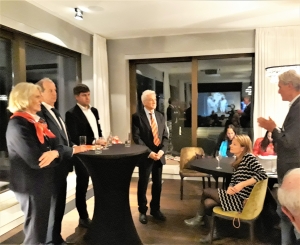 Global Bridges Members and Young Leaders Alumni had the opportunity to share their thoughts on China. Many remarked that the Chinese state takes a longer view of history than the rest of the world. ‘China’ is a culture thousands of years in the making. It cannot be represented simply by a group of politicians. Some remarked that the US Dollar may not last as the world’s premier reserve currency. China has pushed the Renminbi vigorously as an alternative reserve, and its expansionist economic policy – with the BRI as its crowning jewel – plays into this goal. The participants then discussed the new Chinese “Social Credit” system, in which individuals are ranked according to their adherence to Chinese social norms and laws. It is still unclear how this development will affect non-Chinese citizens in the country.

Finally, it was said that as it moves towards becoming the world’s largest and strongest economy, China will inevitably create a world in its own image. There will be resistance, but the nations of the world will eventually have to adapt and adjust. Little by little, Germany will find itself in China’s area of influence. However, Germany should not be only critical of China. Germans should ask: what can Germany learn from China?

The discussion was a great success with exceptional speakers at a time where the topic of China’s expanding influence could not be more relevant to us all.