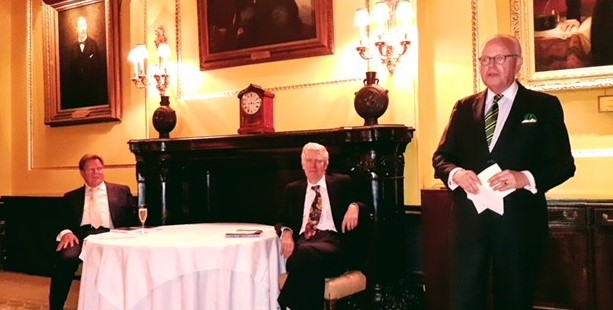 On Monday, 7 October 2019, Sir Robert Cooper presented to members of Global Bridges and some invited guests the book „Brexit. Causes and Consequences“, written by our member Rudolf Adam. The event took place in the Churchill Room at the Carlton Club, St. James, London.

The event was made possible by the generous hospitality of Christiane and Axel Hansing. Among the guests were Dame Pauline Neville-Jones and some prominent journalists.

Sir Robert praised the book as the best account of why and how Brexit became such an obsession in the United Kingdom – or, more precisely, in England. Sometimes, an outsider may be in a better position to see the whole picture than someone like himself who necessarily must be passionately involved. The clear and growing divergencies between the four constituent parts of the United Kingdom are one of the first and foremost dangers inherent in Brexit. By taking away the external ties that bind the country to the EU, Brexit also weakens the internal cohesion of the United Kingdom. The main stumbling block of Brexit has turned out to be the future nature of the border on the Irish island – something nobody foresaw during the campaign in 2016. Sir Robert underlined the mistakes and the incorrect assumptions that guided both David Cameron’s and Theresa May’s approach to the problem. Brexit has resulted in a constitutional crisis. The balance of power between the Crown, the government, Parliament and the people has been radically upset and at the moment a fight is going on who will prevail. It is dangerous to mobilise the people against their rightful and legitimate representatives. A referendum should never replace decisions of Parliament. A referendum can comment or correct decisions by Parliament but it should never become a substitute.

The central, and as it turned out, almost irreparable omissions were:

Firstly, the predominantly negative rhetoric about the EU which completely overshadowed the many advantages of membership,

Secondly, the total disregard for a systematic information campaign about the problems and consequences involved. Instead, some campaigners bandied around some remarkably unfounded promises.

Thirdly, there was no compelling and uniting vision of what should replace EU-membership Brexit was a negative concept, saying „no“ to a status quo without saying „yes“ to something new. I was like setting off on a journey whose destination was unknown and turned out to be hotly contested. This negative approach has paralysed decision-making and led to the repeated negative votes in the House of Commons which seems to oppose all sorts of initiatives without being able to generate a solid majority to support an outcome.

Sir Robert put it succinctly: „52% are no majority as long as they all mean different things.“ Both Sir Robert and Rudolf Adam showed themselves sceptical about the democratic qualifications of a referendum. A lot of precautions have to be taken to ensure that people who vote know what they are doing. Switzerland has a lot to learn from. In Sir Robert’s words, the referendum of 2016 had been organised in a remarkably sloppy way. Referenda, like all political decision, have their half time after which they lose their relevance. Another mistake was to invoke Article 50 and thereby setting the clock ticking without any coherent concept about the strategy and the tactics of negotiations. May allowed herself to be put at a serious disadvantage by the sequencing decided by the EU-Commission which insisted on first completing the withdrawal treaty and only then discussing future arrangements, although the wording of Article 50 suggests a parallel, if not an inverted approach.

There followed a vivid, animated discussion. The present divide in British society cannot be healed by procedural means alone. Neither a snap election nor another referendum would calm the present situation and create the necessary consensus to move on. What is needed, is a sober, informed, rational, open, nationwide discussion in order to sort out national priorities. An election will not produce a clear, overwhelming majority; more probably, it will result in another hung parliament. And a referendum would presumably not only give rise to another, even more truculent campaign, it would in all likelihood not yield the necessary majority to put the matter to rest. Rudolf Adam pointed out that the hope that a referendum could put a contentious political problem to rest „once and for all“ is, by all historical experience, an illusion.

The events of the next day (indiscretion about Johnson’s telephone call with Merkel and the leaked memorandum from No 10 about radical ideas how to proceed with Brexit in the face of mounting resistance) gave additional relevance to the event.