On Thursday evening, 22 of November, Members and Young Leaders Alumni of the London chapter of Global Bridges came together for dinner and a talk by Sir Anthony Joliffe, GBE, DL, at the home of Global Bridges Member Dr. Barbara Haus Schwepcke, CEO of Gingko, a UK-registered charity.

Sir Anthony is not only the 655th Lord Mayor of London, a senior statesman, and a renowned accountant, but also a pioneer in trading with China. 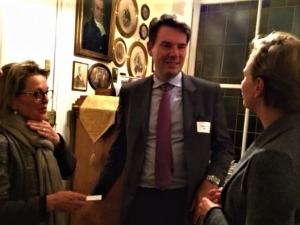 In view of Global Bridges’ close relationship to China, the discussion with Sir Anthony was particularly interesting, especially for the Young Leaders, since he shared accounts from his China, a country many of them never had the opportunity to experience themselves.

In addition to launching a variety of business projects, as well as owning two manufacturing plants that produced kitchen stoves and refrigeration units, Sir Anthony was appointed – thanks to his good relationships – as Special Advisor of the Governor of Yunnan Province and Chairman of the Advisory Board. In 2004, he became Advisor to the Government of Jinan, capital of Shandong Province, China.

Sir Anthony described his shock at the changes that China has undergone in recent decades and emphasized that “today’s China is not the China of yesterday”. On these grounds, he stated that he would not travel to China again.

He also addressed his concern about the upcoming Brexit decision, emphasizing that in turbulent times like these, the work of organizations such as Global Bridges is more important than ever.

At the end of the evening, everyone agreed: London Global Bridges Members and Young Leaders should come together more often to continue theses kinds of interesting and confidential conversations.