The golden rule of the automobile industry is: “Never build a new car with a new team in a new factory.” And this rule should not be broken? Carl-Peter Forster, Chairman of the London Electric Vehicle Company (LEVC) and Member of the Supervisory Board of Geely, taught the members of Global Bridges otherwise.

At the invitation of Carl-Peter Forster, the VI London Global Forum took place on March 15, 2018 at LEVC’s facilities – an excellent opportunity to learn at firsthand how LEVC revamped the traditional Black Cab within a short period of time by transforming it into an emission-free, modern taxi. 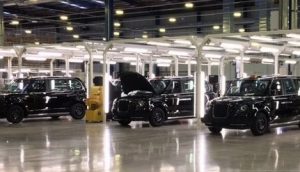 The day began with a cordial reception by Frank Klaas, Head of Communications for Europe and the USA at Geely International. Together with Beate Lindemann, he laid the cornerstone for the friendship between Global Bridges and Geely when a Global Bridges delegation visited the Geely factory in Dalian, China for the first time in October of last year. Frank Klaas reported on the acquisition of London Taxi Company by Geely five years ago, marking the conception of the world’s only electro-taxi adapted to the unique demands of a large city. Already £300 million has been invested in the factory and today “fleet orders” from Germany, France and the Netherlands are in existence. 200 of these taxis have already been delivered to the Netherlands.

After the reception, a factory tour led by product management provided the group with deep insights into the manufacturing process. For example, the managers explained how the clock cycles were able to be significantly reduced since the beginning of production in the past year. They also expounded the regulations to which the strict, internal quality management needed to adhere. 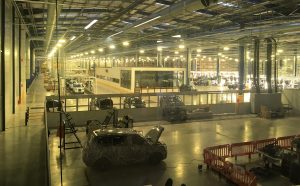 Paul Wooley, COO of LEVC, elucidated the business’s vision – “to be the urban commercial vehicle provider of choice” – and spoke to the diverse challenges that the team faced in order to implement this vision within a short period. As an example, he explained how the tight schedule for the renovation of the factory on the “green meadow” had to be delayed by three months due to the discovery of a particular type of newt that first needed to be relocated. In addition to this, a new frame for the vehicle had to be developed out of aluminum in order to balance out the weight of the battery as well as to maximize the electric range of the taxi.

Frank Klaas pinpointed the special challenges of the LEVC’s production communication and briefed the group on the information program designed for the over 25,000 London cabdrivers.

Julian Servant, Commercial Director at Emerald Automotive, listed some of the unique obstacles while redesigning London’s symbolic Black Cab. For example, there needed to be enough space built in for six passengers while using the same vehicle dimensions meant for five; and, of course, the vehicle had to be handicap accessible while simultaneously maintaining its unique turn radius. 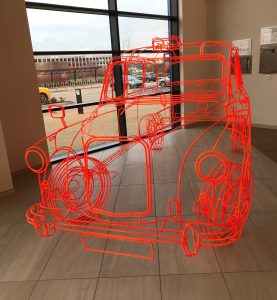 As a crowning conclusion of the day, the members of Global Bridges were driven to Ansty Hall, where the dinner with Carl-Peter Forster, Chairman of LEVC, took place. He generously led a seemingly never-ending Q&A session during dinner in which he spoke at length about the current developments, challenges, and perspectives of electro-mobility. He also made it clear how LEVC, despite all adversities, has successfully managed to bring a new car – created in a new factory with a new team – to the market. The key to LEVC’s success? A first-class team of experts with many years of experience in the automobile industry, an environment similar to that of an agile start-up, and, of course: a convincing product. Despite having only just returned from China that Monday, he showed no sign of fatigue, even when answering a myriad questions until late into the evening.