40 Young Leaders from Germany and the People’s Republic of China came together in the Free and Hanseatic City of Hamburg to discuss both the challenges as well as the opportunities of today’s global development. The Military Academy of the German Armed Forces in Hamburg-Blankenese generously hosted the conference. The campus offered a great setting for the working groups and their discussions on topics such as sustainable economic policy, Industry 4.0 and “China’s Belt and Road Initiative.”

The Chinese People’s Institute of Foreign Affairs (CPIFA) is a longtime and highly esteemed partner of Global Bridges. The head of the Chinese delegation was CPIFA Vice President Ambassador Liang Jianquan, who selected an impressive group of Chinese Young Leaders from the diplomatic corps, think tanks and corporations.

Apart from the discussions within the working groups and panels, the mutual exchange of the Young Leaders was the key focus of this conference. The longest serving minister of defense in the history of the Federal Republic of Germany, Volker Rühe, gave an impressive keynote speech on strategic thinking in politics. “See the forest, not the trees,” was his advice to the Young Leaders. 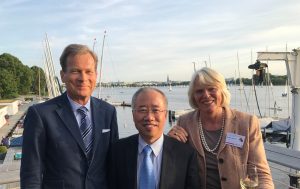 Global Bridges board member, Jan Klatten, invited the Chinese-German group on a particularly bright and sunny day to the legendary “Norddeutsche Regatta Verein,” one of the oldest and most exclusive yacht clubs in Europe, based in Hamburg-Uhlenhorst.

Both the German and Chinese Young Leaders were deeply impressed by the presentation given by Zhengrong Liu, Executive Board Member of Beiersdorf, who is responsible for Human Resources and Corporate Communication. Liu came to Germany as a student from China and flourished at Beiersdorf by applying what he considers to be the best in German management culture – “long-term vision” – and Chinese management culture – “flexibility and endurance.” He went on to explain Beiersdorf’s 130-year streak of success. Throughout its history, the company has built trust by remaining close to its consumers and developing innovative skin care brands that are tailored to their needs. Working as one global team, the company strives to become the number one skin care company in the world.

Other highlights included visits to the Hamburg City Hall for a talk with state secretary Wolfgang Schmidt about the outcomes of the G20 Summit and a visit of the Elbe Philharmonic Hall, one of the largest and most acoustically advanced concert halls in the world, where the G20 leaders just recently gathered.

In the sense of Global Bridges founding father, Walther Leisler Kiep, the 2017 Young Leaders have been left with great confidence to jointly solve global challenges in mutual respect for the great cultures of China and Germany.