For more than a quarter of a century, representatives from Global Bridges have been traveling to China. Throughout this time, they have had the chance to follow China’s impressive growth, appreciate its achievements, but also to perceive its sensitivities. 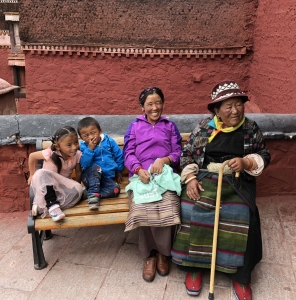 The autonomous province of Tibet is a direct representation of this sensitivity. Tibet, a country located in the northern region of the Himalayas and often referred to as the “roof of the world”, has developed its own distinct culture and given Buddhism a home in China. Whether occupied by Mongols, Manchurians or finally the Han-Chinese, Tibet has had little opportunity in its turbulent history to assert its own political independence. Its current government by the People’s Republic of China is quite controversial under international law, a fact that is clearly seen in a different light in Beijing. This heated debate is personified in the figure of the 14th Dalai Lama, who prefers to assert political power from exile in India rather than to return to Tibet and have his role restricted to that of a religious leader. 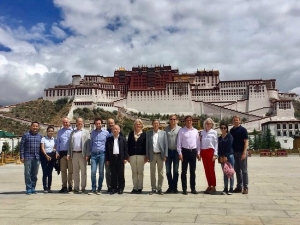 Against this background, Global Bridges’ delegation was subjected to extra “care” from Chinese and Tibetan guides throughout our time in Tibet, a service that clearly exceeded the normal level of hospitality. Before embarking on the trip, all delegation members had to affirm that they had never met or spoken with the Dalai Lama. Even so, our contact with locals during the trip was very limited. We ate in private areas, paid a visit to a happy-looking farmer, and visited a brewery, where on the day of our visit, the workers were unfortunately absent due to an annual health check-up. We were compensated for the few incompletenesses of our tour, however, by an outstanding cultural program including the opportunity to visit the Potala Palace, the monastery Tashilunpo and also an amazing musical.

What is for Indians the buffalo and for Europeans the cow, is for Tibetans the Yak. The Yak Museum illustrates the significance of this animal to the region through modern exhibitions.  The Yak won its status through its ability to carry soldiers over the frozen, high Tibetan terrain during the “Long March“. Such a feat wouldn’t be imaginable with a German cow. 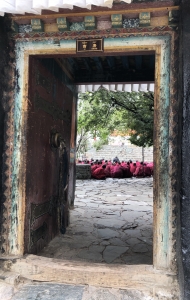 Those not yet suffering from headaches due to the high altitude could be sure to make up for it after an exhaustive explanation of the social and support programs in place for the rural population of Tibet. Key indicators like the increase in disposable income, job creation, medical care and the establishment of reserved spots for Tibetans in schools and universities showed us the dynamics with which China develops its territories. During our expeditions, we could see massive construction projects for which no European investor would have a good economic explanation.

Our competent and charming Chinese hosts had prepared an extensive schedule, from which we were hardly able to deviate. It falls to the art of diplomacy in Tibet to find a compromise for its visitors—to give the feeling of authentic life in Tibet in all its complexity while at the same time being sure to convey China’s considerable efforts in the region.

Those who want to further the case for the Chinese presence in Tibet should speak to the heart and not just to the mind. We are convinced that Tibet has understood the wisdom of the heart since its inception.  We look forward to the realization of these efforts during our next visit to what is one of the most inspiring and scenic areas in the world.

First Study Trip to Kenya and Rwanda
Scroll to top