In preparation for our video conference “Russia – quo Vadis?” on August 25, 2020 we had followed the news about Russia with excitement in the last weeks. In the light of the current events, our guest speaker, retired Ambassador Rüdiger von Fritsch, German Ambassador to Russia from 2014 to 2019, had numerous questions to discuss. Dr. Angela E. Stent, Professor at Georgetown University in Washington D.C. and Director of the Center for Eurasian, Russian and Eastern European Studies, moderated and completed the discussion. Both have recently written a book on Russia. Von Fritsch’s “Russlands Weg. Als Botschafter in Moskau” will be published in autumn 2020. Dr. Stents “Putin’s World” was published in early 2019.

On current occasion: Case of Alexei Nawalny
The evening began with the question of the alleged poisoning of the Russian oppositional Alexej Nawalny. According to von Fritsch, the crime can be traced back to different circles of perpetrators. However, it can be assumed that it was carried out either in close consultation with the Kremlin or on its direct instructions. Possible reasons, he said, are the upcoming local and regional elections and the subsequent fear of losing stability and power in the country. Here are two examples from former ambassador von Fritsch:

(i) In neighboring Belarus, the Russian government is observing how an autocrat is suddenly weakened. President Lukashenko is cornered by continuing protests. This shows that unexpected protest movements can be a challenge to the government. According to the understanding of the Russian government, the driving forces come from foreign influences or from opposition leaders like Nawalny.

(ii) Because of the corona pandemic, the economic situation in Russia has deteriorated significantly and the popularity and trust of the citizens towards the Kremlin has decreased.

Overall, however, the government can be expected to remain in power. The classically autocratic leadership will still be able to assert itself with a mixture of oppression, corruption and national pride.

The eternal Putin, whatever his name will be
Von Fritsch lists various development options for Russia. In addition to peaceful democratization (currently less likely) or a violent transformation (never to be ruled out altogether), he considers the following scenario to be the most likely one: 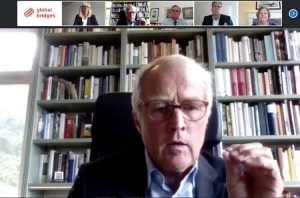 “the eternal Putin, whatever his name will be”. In a referendum, the president extended his term of office until 2036. Whether he will actually take advantage of this, von Fritsch says, is uncertain. However, this will allow him to remain in office longer, to make personal decisions and to appoint his successor whenever he wishes to do so. He must ensure that everything remains as it is – ‘the eternal Putin’.

In any case, for Europe it is essential to remain true to its own principles and to represent them clearly to Russia. It is equally important to continue the dialogue and to use the bridges and resources that have been built up for this purpose in recent years, said the former ambassador.

Germany: The German Chancellor Angela Merkel is the Western politician who is most accepted and respected by Putin. Nevertheless, von Fritsch assumes that the relations between Russia and Germany would hardly change with a new chancellor. However, transatlantic relations could change as a result of President Trump’s policy, for example in the wake of possible extraterritorial US sanctions against the Nord Stream 2 project.

Belarus: On the streets of Minsk, mainly Belarusian and not European flags can be seen. In the end, Russian foreign policy is pragmatic and therefore does not necessarily intervene in every “color revolution”. Belarus is heavily dependent on Russia, so future Belarusian governments would be well advised to maintain good relations with Russia. 50 percent of Belarusian exports go to Russia. So if there were a leader other than Lukashenko that maintains good relations with Russia, Moscow can live with that.

Ukraine: Von Fritsch says that the Minsk Protocol should continue to be followed, although Russia and Ukraine apparently have a different understanding of its implementation. As long as there is no good alternative accepted by all sides, this agreement is necessary to keep the conflict in check, explains von Fritsch. “It is obvious that we are currently not in a position to end the conflict, but we can make sure that it does not get worse”.

China: The Russian-Chinese relationship is important, but extremely unbalanced, says von Frisch. In the end, Russia does not have a strong economy. While China has the second strongest economy in the world, after Europe, the Russian economy is as big as the one of New York State (slightly weaker than Italy’s economy). This partnership causes damage to Russia, which could lead a renewed Russian interest in orienting itself more strongly towards the West. In this case, it is important for the Western side to remain open towards Russia and to make interesting offers so that Russia is not justifyalone with China.

Turkey: The Russian-Turkish relationship is an explosive partnership with two strong autocrats, who enter into both cooperation and confrontation. Von Fritsch believes, however, that they always manage to find their way back to each other. Both pursue common interests and, in the end, both leaders are more pragmatic and rational than other politicians.

Syria Conflict: Without wanting to approve of it, von Fritsch says that from the Russian point of view, Russia has acted successfully both militarily and diplomatically in the Syrian conflict. In the course of the conflict, Russia has been able to increasingly expand its influence. This is also related to the withdrawal of US foreign policy. Also, the conflict serves Russia as a platform for promoting its weapons. Together with fossil fuels, military equipment is Russia’s most important export commodity. Von Fritsch points out that Russia does not always pursue political strategies, but often decides according to opportunities. He does not believe that Russia necessarily wants to play a role in the Middle East in the long term, but rather that it decides according to what room for maneuvering American absence leaves it.