On July 15, our video conference on “Europe and Africa as partners” took place. Just in time for the German EU Council Presidency, our guest speaker Günter Nooke, the German Chancellor’s Personal Representative for Africa, provided deep insights into the relationship between Europe and the African continent. We discussed the challenges and opportunities of a forward-looking partnership. The evening was moderated by Dr. Christiane Kraus, Africa expert in international development cooperation.

Günter Nooke is convinced that the African and European continents must see themselves as partners. Europe would be the first choice for many African countries, although the historical relationship is already heavily burdened. This is mainly due to the fact that the cultural barriers to China are much greater and there is no trust in the USA. In order to take advantage of this, Europeans should work together with Africans to develop a better understanding of each other. According to Nooke, it is important – despite the many differences – to get involved, understand and depend on each other. The two continents are born partners with common interests, but they must not overstrain each other. “There is no point in constantly confronting each other with demands that are unfulfillable for the other”, says Nooke. Instead, he says, future contracts should be based on reciprocity and include principles that apply equally to all. Europe does not have to give up its fundamental values and convictions for this, he said, but Europeans should take into account the conditions prevailing on the African continent. According to Nooke, the thematic priorities and minimum standards demanded should not be too high and hinder cooperation. Instead, it is important to convey that Europe is embarking on a long process, building real relationships and showing mutual interest. 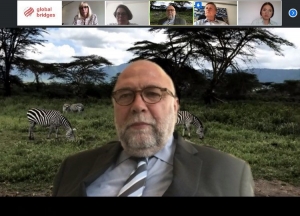 Since 2015, the biggest challenge for the relationship between Europe and the African continent has been the refugee issue, explains Nooke. It will be important to create perspectives on the African continent and reduce the causes of migration. This approach is a rational Africa policy on which all 27 member states of the European Union could agree. One solution would be to push forward the process of industrialization. Above all, it would be important to develop a better infrastructure and to train the workforce. Europe has many opportunities here, but should use them much more consistently and take decisions more bravely. Europe has the chance to participate in endogenous growth on the African continent and to expand the market, said Nooke.

The planned EU-Africa summit will take place in Brussels at the end of October 2020. All 27 Member States of the European Union and all 55 Member States of the African Union will take part. The basis will be a “Comprehensive Strategy with Africa”, which will deal with geostrategic goals, peace and security. According to Nooke, it is important that the strategy is actually being developed together with representatives of the African states. In addition, during the German EU Presidency, decisions would have to be taken which could help to create a new Africa policy:

As an alternative to the Cotonou Agreement, Nooke proposes a continent-to-continent agreement. This would do more justice to a partnership orientation and Europe would have the opportunity to respond more specifically to the Free Trade Agreement of the African Union. In the course of the growing African market and the customs union within the African Union, the willingness of European entrepreneurs to invest is increasing, says Nooke. The African market could currently supply 1.3 billion people and in about 20 years 2 billion people. That would be the largest growth market worldwide. Therefore, it would make sense for Europe’s Africa policy to support European companies in order to invest on the African continent.

China’s commitment as a driving force for Europe

Mr Nooke is critical of the way in which the African continent is dependent on China for its debts. Nevertheless, he believes that it would be too easy to accuse the Chinese of nothing more than selfish behavior. They were the first to help after the civil wars on the African continent. They built administrative buildings and roads which were not exclusively used for the transportation of raw materials. With its commitment, China had filled a gap that no other country had been prepared to fill, even though as a world power China has geopolitical interests as well. But Europe should take this as an incentive to take action itself and make brave decisions rather than reproach China.