Gathered around an oval table decked festively in white, this year’s Global Forum began with an absorbing talk from Dr. Cameron Munter, CEO and President of the East West Institute. The former Ambassador, who worked as a career diplomat in some of the most conflict-ridden areas of the globe (including Serbia and Pakistan), spoke on the topic “New Diplomacy”, the ways in which diplomats have had to change their practices to meet the new challenges of the 21st century.

Our world faces issues that are transnational, ever-changing, and increasingly complex, including – just to name a few – climate change, mass migration, civil war, and international terrorism. It was clear from Dr. Munter’s talk that solutions to these matters require not only effective state-to-state diplomacy, but support from non-state actors, such as private businesses, non-profits, academics, and others. The rise of tech giants like Apple and Google also present both opportunities and challenges for traditional diplomats. 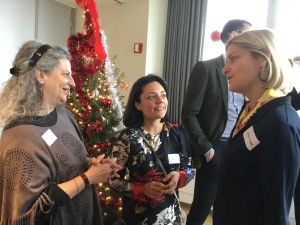 Next was Mr. Axel K. A. Hansing, who spoke on a topic of growing importance to the international financial system: the Chinese government’s goal to make the Renminbi (RMD) the world’s leading international reserve currency. Since the Breton Woods negotiations of 1944, the US dollar has served as the world’s most commonly used and widely trusted currency. Alongside its Belt and Road initiative, the Chinese government seeks to reshape the current global financial order by promoting the RMD as a rival to the Euro and the US Dollar. China has also sought to create parallel banking institutions to rival the WTO and IMF, both also introduced as part of the Breton Woods process.

Those in attendance certainly knew their material, and asked pointed, perceptive questions to both Dr. Cameron Munter and Mr. Hansing. What should we make of the 21st century’s new diplomatic landscape? What are the political and economic implications of China’s goal to reshape the global financial system? The excellent participation from those in attendance made the discussions at this year’s New York Global Forum a true highlight.

With so many Global Bridges Members and Young Leaders Alumni residing in the United States, Global Bridges will continue to maintain close contact with its American colleagues. The success of 2018’s New York Global Forum, with such highly qualified speakers, perceptive attendees, and an inviting, festive atmosphere, has only strengthened this commitment.