The COVID-19 pandemic challenges all societies. It changes their dynamics and the routines of their people. The Middle East and especially Israel are particularly affected by this development, as both Dr Asher Susser on May 18 and Dr Gershon Baskin on May 25 explained to us in the two Global Bridges video conferences on Israel. Both are leading Israeli Middle East experts and well known friends of Global Bridges through our many study trips: Susser is Senior Fellow at the Moshe Dayan Center for Middle East Studies and Baskin is founder and co-chair of the Israel/Palestine Center for Research and Information (IPCRI). The conferences were chaired by Dr Steven Althaus, former Chief Marketing Officer, BMW AG & Credit Suisse Group, who created a pleasant and constructive atmosphere for discussion. The introduction of the topic and speakers was taken on by Dr Beate Lindemann.

The Corona crisis and the Middle East 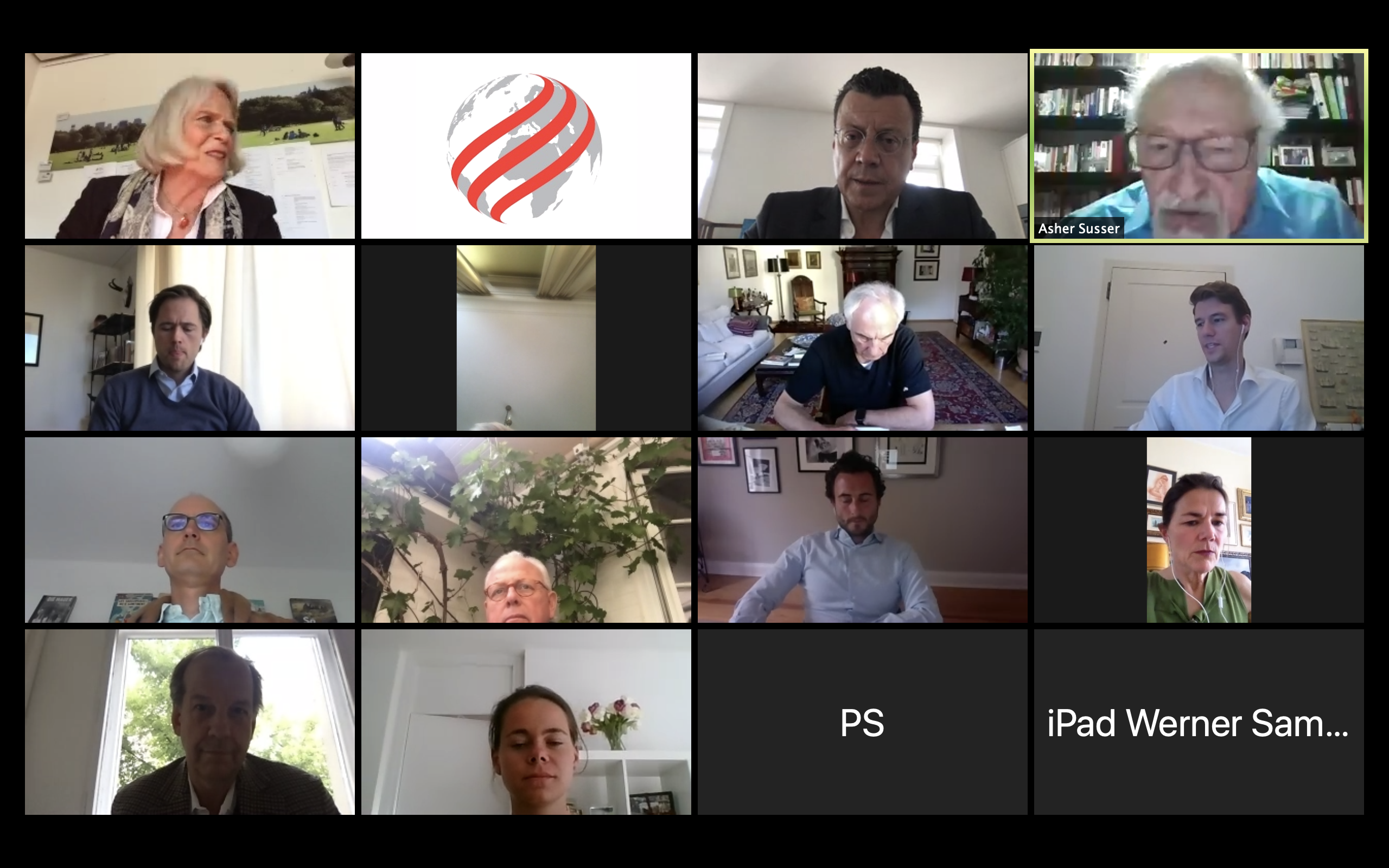 The coronacrisis came at the wrong time and hit the region at a time already marked by economic weakness, Susser said. Particularly weak performance was shown by Saudi Arabia, which is seen as the leader of the Arab world. However, in the current crisis they are lacking decision making power. In a modified form, this insight also applies to Iran that was hit by the crisis at a low point in the power of its regime, said Susser. But it was not only the regime and power structures in the region that were threatened, but also the people on the streets in the respective states. For them, the crisis accelerated the downward spiral they were already in, since export prices are falling, tourism is collapsing and remittances are lacking, Asher Susser sums up. For the entire Middle East region, he notes, that there is a deep-rooted authoritarianism, which was weakened in the wake of the Arab Spring, but the outbreak of COVID-19 “turned the wheel back again”.

Susser and Baskin agree on the point that the current situation could create a new social dynamic within Israel. Both expect that the Arab minority with Israeli citizenship will benefit from the expected dynamic. Their 20-percent share of the medical staff has significantly increased their visibility in society and has created a sense of cohesion with the rest of the population.

Asher Susser also expects the ultra-orthodox minority in Israel to lose a great amount of social prestige, as they “are part of the problem in this crisis”. The disproportionately high infection rate within this group reflects the disregard for imperatives to contain the pandemic. While the Israeli Arabs have become an integral part of society, the ultra-orthodox have moved away from it, Susser said. In this context, Baskin also pointed out that the ultra-orthodox are key partners of the Netanyahu government and that the crisis could trigger a political turnaround in the country.

The Plan of the Century 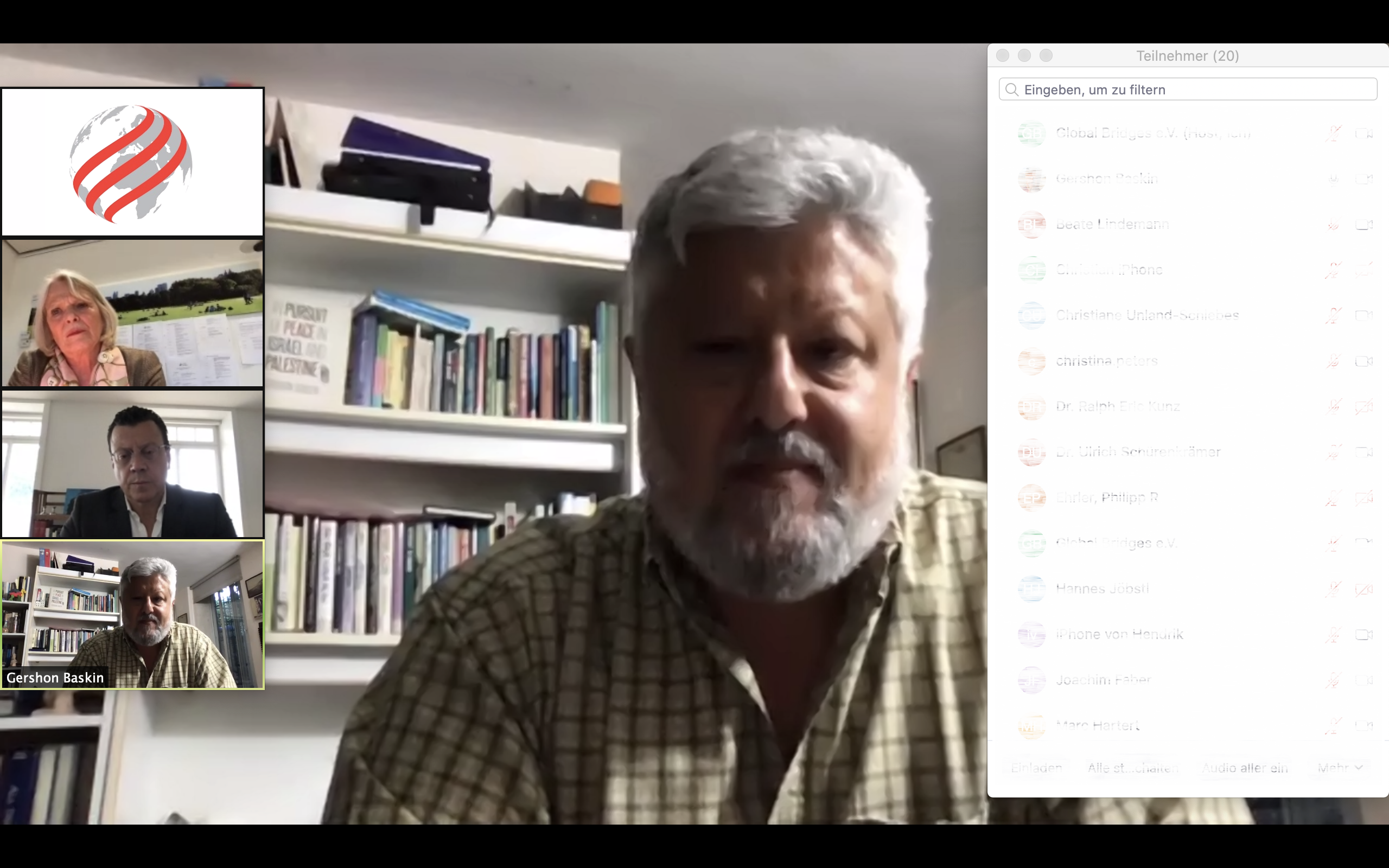 On the background of his many years of experience in Israeli-Palestinian peace negotiations, Gershon Baskin is very critical of the current US intervention in the Middle East and describes it as a “negative influence”. Especially the administration of President Trump would create a negative atmosphere by moving the US Embassy to Jerusalem and proposing unacceptable plans for conflict resolution, as Asher Susser also noted. Instead of discussing whether or not there should be a two-state solution, it would be more important to agree on principles to allow for a new round of negotiations, Baskin made clear. In addition, not only Israelis and Palestinians should be involved in the negotiations, but also Jordan, which is already taking on the role of neutral administrator.

The relationship between Israelis and Palestinians can best be described as co-dependence since the Israelis depend on the Palestinians’ labor force, and the Palestinians in turn need Israel for a basic supply of water and food. To try to solve such a complex system with a Plan of the Century is impossible, but unmasking, because the US – just like the EU – supports regimes instead of people. For Baskin the greatest sources of danger are, on the one hand, a power vacuum in Palestine and, on the other, the loss of faith in the possibility of a solution. The first signs of this can be seen in Israel, whose citizens are usually very focused on their state and less interested in the problems in their region.

When asked about the new Israeli government with Benny Gantz, candidate of the Blue-White Coalition, both agreed that Gantz’ political vision is unclear and that he led a questionable election campaign. Both described the Netanyahu challenger’s lack of decisiveness as a major weakness. Both the distanced relationship with the Arab minority, which cost him a majority in parliament, and the long, categorical rejection of a coalition with Netanyahu’s Likud, which he eventually entered into, confirmed the experts’ assessment.

When asked by Steven Althaus whether there was a positive momentum in the country and whether the grand coalition was now in a position to deal with the coronacrisis or maybe even other major crises, Gershon Baskin clearly denied. The government would have only been formed because there were no options left and those responsible could not think of no other solution.

As a closing point of the video conference, Mr Althaus asked both speakers to address a fictitious graduating class of 2020. Both Susser and Baskin focused on the young generation in the Middle East. Asher Susser, who referred more to the Israeli youth, asked them to develop a vision for the future, to see themselves as pillars of the future, to reduce conflict and increase contact between Israelis and Arabs. In contrast, Gershon Baskin referred to the Palestinian youth, describing them as “the greatest source of optimism in the region”. Especially in Palestine, young people will determine the future, whose leaders will be female, Baskin concluded.

Briefing on the current situation in Jordan with Ambassador Birgitta Siefke...
Scroll to top